WORTH THE WEIGHT Blog Tour 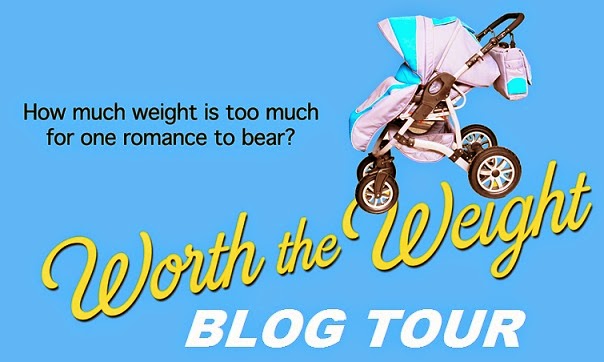 As part of the WORTH THE WEIGHT blog tour, I feature guest author, Eileen Palma, and her thoughts on writing everlasting love.


***
The Good Wife
I was single before you could let a computer find your soul mate on eHarmony.  Before you could change your relationship status on Facebook.  Before you could snap date-night selfies with your phone.  I’m sure you must think I’m a senior citizen, but actually I was practically a child bride by today’s standards.
I married my college sweetheart two weeks after graduation.  My husband Doug and I started dating when I was twenty, which took me off the dating market for all of my twenties and what is now left of my thirties.   My un-married dating life ended with five dollar all you can eat pizza buffets, and rented VHS tapes from Blockbuster.
Apparently I wasn’t paying attention the day that the writing teacher said, “Write what you know.”  Because I have no clue what it’s like to be living on the Lower West Side and single in your thirties like Jack and Kate from my rom-com Worth the Weight.  But, J.K. Rowling didn’t know what it was like to be a ten-year old boy wizard, and Stephanie Meyer had no idea what it was like to be a hundred-year-old vampire and I’m pretty certain that E. L. James doesn’t know half as much about bondage as Christian Grey.
I may not know anything about the single life, but one thing I do know about is love; the kind of unconditional love that movies are made out of.  That guy from The Notebook has nothing on my husband. When he agreed to support me in sickness and in health he had no idea what he was getting into.
Three years after our wedding, while Doug was still in vet school, I gave birth to a beautiful baby girl named Molly.  Hours after the C-section, my body ballooned with fluid, my blood clotted uncontrollably, my liver enzymes were through the roof and my blood pressure was so high I needed to be on an IV drip of Magnesium to prevent seizures.  I had developed a life threatening autoimmune condition that affects pregnant women called HELLP Syndrome.  For seven days and seven nights, Doug didn’t leave my side.  The nurses took pity on him and gave him a pair of scrubs so he would have a change of clothes.  The only food I remember him eating were the leftovers from my food tray.

When we finally went home from the hospital, it became clear pretty quickly that while I was out of the woods, I would be plagued with health problems for the rest of my life.  When mothers complain about all those late night feedings they had to tackle while their husbands slept, I think about how Doug woke up every single time to feed Molly so I could rest and get my health back.  He spent many a night reading aloud from veterinary textbooks while rocking Molly to sleep.
When Doug graduated, he worked two jobs for many years to support us never once making me feel guilty for being too sick to work.  It might sound crazy, but in a way I feel lucky.  Many marriages don’t get challenged with serious illness until the couples are much older than us.  Sometimes the marriages don’t survive.  I know that no matter what challenges come my way, I have someone who loves me no matter what.

I may not know much about being single in 2014, but I know enough about love to fill volumes of books.

About the Author: Eileen Palma has an English degree from the University of Massachusetts, Amherst and has studied Advanced Novel Writing at Sarah Lawrence College’s The Writing Institute. Her writing has appeared in The Momoir Project, Macaroni Kid Bronxville, Patricia Dunn's author blog, Blogging in the Big Apple, PTO Today and on the front page of Our Town.
﻿

About the book: WORTH THE WEIGHT, a modern twist on YOU'VE GOT MAIL, explores what happens when the CEO of a super-sized stroller company falls for a famous kids fitness guru.  Jack Moskowitz has always been proud of his brainchild Considerable Carriages, a company that manufactures car seats, strollers and high chairs for overweight children.  That is, until he meets Kate Richards, host of ABC’s KidFit and New York Times Bestselling author of the kids’ diet cookbook Mini-Munchies, the day after she tears his company apart on a network talk show.

As a participant, I was given a complimentary copy of this book. My review for WORTH THE WEIGHT will be featured next!


Find out more about this author at http://www.eileenpalmaauthor.com/