Review: WORTH THE WEIGHT by Eileen Palma 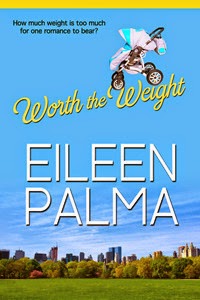 “Children are so FAT today. Isn’t there some way we can make money off that?” –Agnes from The Simpsons


Well, that’s exactly what Jack is hoping to do with his invention—extra large seats for heavier children. Did he not see the issue with that?


Kate Richards was the official spokesperson for KidFit, a T.V. talk show against childhood obesity. Technically, she was also banking on the little fatties. She is considered Jack’s nemesis, but the two can’t help but feel an instant attraction to each other. The two had a great, effervescent chemistry that was often youthful and klutzy. Their whole interlude read like a high school episode with two love-obsessed teenagers. Still, the moments when they talked and connected felt genuine, albeit a little sappy sometimes. But you figure that with all the things that they both have to deal with in their lives (Jack looking after his niece while her dad is in Afghanistan and Kate rushing to pay off some bookie to save her father), it was a comfort to know that they could confide and be there for each other.


Of course, no romance can stay perfect without a little conflict messing things up. In this case, Jack wasn’t honest about who he was—owner of the fat carriage company she’s been publicly bashing—before getting tangled up in the sheets with the woman. It’s like two people with opposing political views. How can anyone make that work? I guess it’s easy when all they could think about was sex. I must say some scenes were a little lascivious.


But political views have a way of creating war. Suddenly, both sides are firing at each other amidst the chaos of the sleazy paparazzi. I must say that the media turning up the heat and shaking things up made the plot more interesting. What better way to turn their world upside down? Will the pair be able to figure a way out of this mess? Can they save their careers or risk losing everything for love?


Sprinkled with light-hearted humor, Worth the Weight is a sweet, contemporary romance that paralleled similarities to the book/movie Must Love Dogs. Even with the zany dating advice from the eccentric group of characters, it was ultimately the dogs that hooked these two up. Also, Kate reminded me a great deal of Diane Lane with her awkward sensitivity and shyness. To be perfectly honest, I only saw the movie once (never read the book) and thought that it was an okay story, and Worth the Weight felt like a rehash of the same story but with a media-frenzy twist. In fact, that little twist made it better. It was interesting to see the nutty side of fabricated headlines, flashing cameras, and emergency PR work. I was actually curious to see how it would turn out (even though I had a good guess.)


So if you love dogs and quirky romances, this is the book for you.