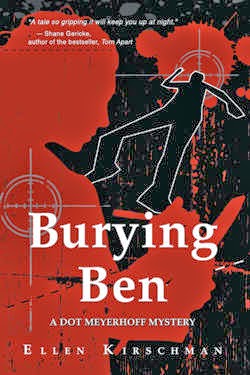 Dot Meyerhoff is a newly-hired police psychologist with a subdued tells-it-like-it-is attitude. Ben Gomez is a naive, rookie cop, who nearly gets sick when seeing his first dead body at the scene of a crime. Constantly hassled by his superiors and peers, Ben starts to question whether or not he’s cut out for police work. That’s where Doc Dot comes in.


Part of me was worried about poor, old Ben. He obviously was struggling with some major emotional set-backs. But Dot did have a point: “Academic types like to revel in nuance and collect data before making decisions. Cops need to think on their feet and think fast.” (30) SO TRUE! Not everyone can be a cop, and I couldn’t help but think that Ben just couldn’t be one.


Still, you can’t help but feel for Ben in his heart-wrenching struggles and over-bearing stress with his hard work at trying to be a good cop, a good husband, and a good soon-to-be-father. I mean, who wouldn’t be stressed with a whiny, selfish wife like April? What a bitch! What choice did Ben have?


After Ben’s suicide, Dot finds herself at risk at losing her practice, her license, everything she’s ever worked for.


The reader joins Dot in her quest to learn the truth and the reason behind Ben’s suicide.


The author writes with dignified humor and sensitivity. Full of well-crafted characters and a quick plot, this psychological mystery is a gripping read from start to finish.