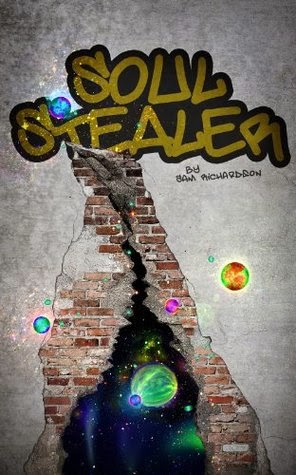 In order to save the Universe, Barney and Eve must hunt and capture a magical band of thieves, before they steal the Souls of any more worlds. On their amazing adventure, Barney nearly soils his underpants on a wild ride on a giant eel, and Eve narrowly avoids death by giant flying scorpions. Both must endure a feast of eyeballs and other gelatinous delicacies, escape the clutches of an undead child, and still stay on the trail of the evil thieves.

My thoughts: Like Alice falling into the rabbit hole, Barney and Eve stumble into an alternate universe. The author created a world blended with the mystifying styles of Harry Potter and Willy Wonka.


On a mind-boggling quest to save the world, Barney and Even blunder through floating fortresses, giant spiders, and pooping sea horses. I enjoyed the jovial quips between the two siblings in their journey. Barney is just the feisty, annoying, little brother while Eve is the sensible and pragmatic type, which make for a fairly odd couple.


The story started off a little slow before transcending into an infantile plot that confuses the reader with complex characters and far-fetched notions.


The writing was okay, but could use a little improvement.


Overall, this book had good intentions for a Middle-Grade fantasy tale, but it was one that I couldn’t quite get into.