Review: THE REFLECTIONS OF QUEEN SNOW WHITE by David Meredith 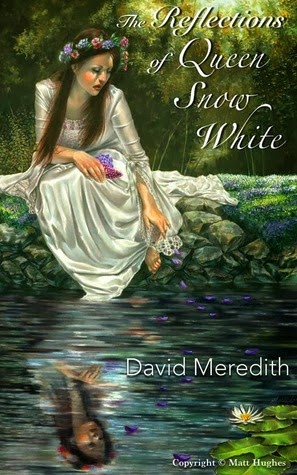 On the eve of her only daughter, Princess Raven's wedding, an aging Snow White finds it impossible to share in the joyous spirit of the occasion. The ceremony itself promises to be the most glamorous social event of the decade. Snow White’s castle has been meticulously scrubbed, polished and opulently decorated for the celebration. It is already nearly bursting with jubilant guests and merry well-wishers. Prince Edel, Raven's fiancé, is a fine man from a neighboring kingdom and Snow White's own domain is prosperous and at peace. Things could not be better, in fact, except for one thing:

The king is dead.


My thoughts: My fascination piqued as soon as Queen Snow White entered the scene. For her daughter, the princess, every wedding guest would bring a gift that was more exuberant than the last—and Snow White grew weary of it. This was definitely different than the Snow White most of us grew up with. Once the pristine maiden “as white as snow,” our queen spent her days growing older in desolate and forlorn despair.


Aimlessly wandering in bitter hopelessness, Snow White was lost without her king. In a desire to escape, she fled into the dark corners of the castle, where she stumbled across her evil stepmother’s chamber, bringing forth distant and tortured memories. Then she saw it again—that old mirror that answered the constant question, “Who was the fairest of them all?” This then launched the tale into a whirlwind of memories.


Draped with a dark twist, this story illustrates the emotional scars of loss and repression. Fear, anger, and sadness consume our dear Snow White in her suspenseful journey as she confronts the harsh truth of the mirror: “The past is the past and your past is ever a part of you! Only by facing it can you truly leave it behind. Otherwise, it will ever intrude upon your present…” (32)


The reader embarks on a harrowing voyage through time, experiencing fleeting moments in Snow White’s broken past. Much of the story and dialogue was in this Old English, which was somewhat ambiguous and at times unpronounceable, but oddly fitting.


Well-written and enthralling! This story reveals the underside of the “happily ever after.”

My rating: 4 stars
Posted by Sandra's Book Reviews at 8:50 AM