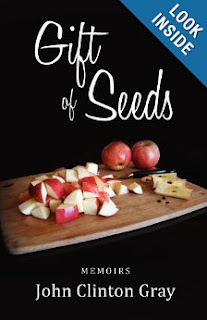 In these essays, we are strolling through 5 decades of memories starting from the 1950’s; it’s like a walk in the park.


“We were hooked [on sugar] from the time we were old enough to play outside on our town, until puberty arrived and changed the world forever.” (4)


“Little kids were exempt from their bullying, but the day came when we had grown into suitable prey.” (4)


Full of honesty, this book is a captivating coming-of-age narration from boyhood to manhood. John Gray is a poignant and funny character, which is revealed in his short, quirky ruminations about life and experience.


The reader becomes a traveler in these tales—we go from the farmlands in Delaware to scouring pipes in Levittown sewers to meeting Columbo on a flight to JFK. Admittedly, however, some stories were not that interesting, like the baseball one, for example (but that’s just because I’m not really into sports.) At times, I felt that the details got a little too technical with dates and historical facts—a few too many numbers, if you ask me. And why was there a recipe?


“Companion Flier” was, by far, my favorite story—simple, quick, and hilarious!


“Maine Event” was another great one about John’s first love and first heart break at 12-years old. “Boys at that stage know all about boners, but only theory about what the equipment is for.” (250)


“Novel Idea” illustrated the pivotal essence of the whole writing experience that EVERY author goes through from the inception of an idea to the turbulent trials of developing a story. “Some successful writer wrote that writers just write. Even if we go back and delete most of what we pecked out and start over, we write. Even if we feel depressed and unworthy, we write. Even when we’re arrogant assholes, we write. Well…WTF…I’ll just start.” (266)


Even though this is a non-fiction account of a man’s life, Gray writes with the heart and skill of a story-teller.
Posted by Sandra's Book Reviews at 11:31 AM