Review: THE MAN AT THE CAFFE FARNESE by Janet Simcic 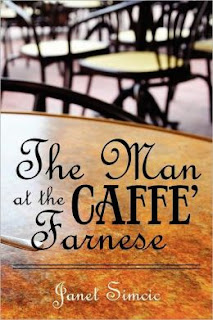 “The language, the gesturing, the scent of coffee, even the dreaded customs line fascinated me. I was in love with everything Italian.” (1) It was love at first sight for Julie Walden.


“There were four clearly marked lanes; yet the drivers seemed to hover on the lines, creating five lanes as they vied for space and speed.” (2) Yes! It was like I was right back in Italy!
Julie, Mary, and Liz are all 50-something women—a wacky, funny group of characters like The Golden Girls—and they’re on this exciting journey in Italy to practice the language and learn more about their roots. It was hilarious how they all loved to drool over Antonio, the landlady’s young, hot Italian lover.


Mary is the neat, old crab; Liz is the flirty shopaholic; and Julie “yearned to be surrounded by Italians, wanting to breathe in the language.” (27) The main protagonist, Julie, has disconnected from her husband and feels that escaping to Italy would somehow lead her to discover who she is again. Then temptation shows up in the man at the Caffe Farnese named Dante.


What was interesting was that all these women had baggage and were struggling with the disharmony of marriage, even the British lady, Gabby (the one dating that sexy Antonio.) The American women seemed to envy the longevity of Italian marriages. Yeah, that’s because Italians don’t divorce. They weren’t raised to divorce, and, at one point, it was even illegal to divorce. That’s why the divorce rates are low and America continues to be #1 in it. Yay, we’re #1!


It was unusual that the story was told from the POV of Julie and Gabby. Why not all four women or just Julie? Why include Gabby, who didn’t seem as essential by her brief segments throughout the book? Personally, I would’ve liked to have heard from Mary and Liz, too. Also, not much time was spent on the search for the Italian roots. It was mentioned for just one second, and then it just dropped all together.


Nonetheless, the emotional entanglements and strain continued to be a gripping notion to the conclusion. Everyone was right: Julie was too American, and it would never work with Dante no matter how “perfect” they were for each other. Still, will she give in to him or not?


What I liked best was the acute depiction of life in Rome—how Romans don’t live by time, the late dinners that often last for hours, the long staircases, and the breath-taking views. I felt like I was right there again, treading the congested cobblestone streets of Italy.