I just read the newest E-book by Margo Candela, Just Like That, which just released today and is available for download. 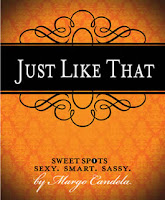 Leslie Quinn is a hard-working woman with a nagging boss and a man-child boyfriend still living with his parents. The first thing that came to mind was: why was she wasting her time with this loser? What a slob! It was painstakingly obvious that this guy was in it for the twin package—a mother and a sex partner all rolled into one.

To me, Leslie seemed like a smart and level-headed woman, so I was perplexed at why she would throw herself back into the miserable dating scene after getting rid of the boyfriend. Was it just to get back at him? Probably. Why else was the girl stalking the boy on Facebook? Couldn't she find happiness on her own?

Obviously, the best part was when that 6’2” luscious Mr. Tate steps in (my only beef was that it took forever to get to him.) In a moment’s notice, Mr. Tate was able to revive the woman in Leslie, resurrect desires she presumed never existed, freeing the inhibitions locked inside her. For the first time, someone was acknowledging her needs for once; and she allowed herself to enjoy it...for once.

I’d hate to say that it took a man for Leslie to find the courage and strength to take control of her own destiny, but perhaps she needed the right man to press the locator button.

As in previous works, Candela peppers in that witty, snarky humor, adding that sweet, tart flavor to the story. Way to go, Margo!