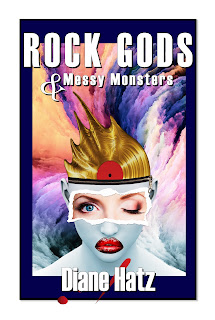 Rock Gods & Messy Monsters is one woman's search for herself among the blood-soaked walls, dangling body parts, and alien-hatched explosions inside Acht Records.

It’s the 1990s. Alex arrives to work at Acht, her improbable blonde hair streaked stress magenta and anger black. Her first duty is to wipe blood off her boss’s walls, to clean up his blood vessel explosion. It goes downhill from there.


On the surface, Rock Gods & Messy Monsters is a story about life inside an entertainment company. A cast of comedic characters exemplifies the inner workings of Acht, where power and greed mask incompetence.

A series of escapades involve Alex, a hard-working, lower-level employee desperately trying to get promoted. When she does, she realizes her dream is a nightmare. Corporate executives are busy working with aliens to manufacture a half-human, half-robot superstar. At the same time, one of the doubly-named Senior Senior Executive Presidents attempts to overthrow the Deity in charge.

Underneath and between the lines of exploding body parts and brain extractions, Rock Gods & Messy Monsters is a cautionary tale. It reminds us that our dreams can be illusions, and learning who we really are takes courage and a commitment to self-love.

The blood didn't bother Alex but cleaning it up made her angry.

"Damn it," she cursed aloud as she surveyed the red stained walls and coagulated mounds of Langley ooze around her boss' corner office.

Alex returned to her desk, her wildly improbable blonde hair already streaked stress magenta and anger black. It was coming to an end; Alex had to get out of her job. But with the worldwide recession and lines of job applicants she saw every day on her way into the building, she was lucky to have a job, especially in a major record company.

Alex put her backpack on the floor and unzipped the side of her head. She reached in and pulled out her brain, placing the throbbing gray matter in the customized, faux crystal cerebrum urn Acht Records had supplied her with her first day at the company. She had fought the procedure at first, refused to sign the Cerebrum Extraction Release form, but with times being as hard as they were, and with the knowledge that she had spent over six months unemployed before being offered this job, Alex knew she had no choice.

And after wandering through the homogenous maze of Acht, up and down forty floors of identical gray hallways and glaring fluorescent lights, she had realized she would be better off if she removed all traces of thought and intelligence before commencing employment at the company.

Topic:  What are the most important things you've learned as a published author?

As a first-time indie author of Rock Gods & Messy Monsters, I've learned so much—some things I did correctly and some so wrong. My next book will be a guide on how to indie publish. I hope to help others avoid my mistakes in publishing and promoting the novel.

One of my biggest blunders was using a print-on-demand company and thinking I didn't care about royalties. I wanted to get the book online and move on to the one I'm currently writing. After I realized how much work was involved in publishing a book, I changed my mind. And the $1.50 royalty from this company was appalling when I discovered I could make over $5 a book if I went directly to Amazon.

I left the company I had started to use. The problem was the book had gotten up on Amazon's site, which meant I had to get a new ISBN. That meant I had to publish it like it was a new book. Even though I was now publishing directly to Amazon's KDP, they refused to remove the first listing. So, if you search for me on Amazon, you'll see two listings for my book. That was the biggest mistake I made.

What does that mean for you? Whether you like Amazon or not, consider publishing directly to them. Then publish to IngramSpark if you want to go onto other sites like Barnes and Noble or Bookshop.org.

●       Everything takes longer than you think. For me, it was months and months longer. Understand that and give yourself double the time you think you'll need to get your book out.

I submitted my book to IngramSpark a few days before a holiday. Little did I know it would take two weeks for it to get approved by them. I needed the book as soon as possible. I spent some sleepless nights wondering if I'd have it for sale in time for book promotions I had lined up.

Rock Gods is starting to go for sale online now, so I think I might have just made it in time. You don't need that kind of stress.

●       There is a lot of misinformation online. I read articles on indie publishing and watched hours upon hours of YouTube videos on book promotion. A lot of it is good; some of it is confusing, and some of the information is wrong. And it's incredibly confusing when you start.

I highly recommend the Alliance of Independent Authors (ALLi). It costs about $130 a year, but you can use IngramSpark for free through them. Most importantly, you get access to their private Facebook group. I so wish I'd found the group while I was angsting over how to publish my book.

ALLi is the most helpful group I've found. A moderator or fellow member will answer your questions quickly and thoroughly. I can't recommend them enough.

If you're working on a book, I wish you all the best in your writing endeavors. Being an indie author is not for the faint of heart, but it's worth every moment of angst and stress. Write on! 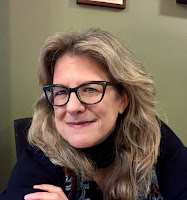 Diane Hatz worked at major and indie record companies, managed a band, and freelanced as a music publicist. She is co-founder of The Relay, a fanzine on The Who, which is in the Rock and Roll Hall of Fame. She’s attended thousands of concerts.

Diane has a Masters in Creative Writing and is currently focused on writing fiction. Her book Rock Gods & Messy Monsters is currently available from most online retailers.  Her substack “Next Draft with Diane Hatz” is a newsletter for creatives looking inward. And some writing stuff.

During her sometimes-surreal career, Diane founded the nonprofit Change Food, worked to shut down factory farms, organized & spoke at major TED/TEDx events, and executive produced The Meatrix, a Webby Award winner. She has studied with many spiritual teachers, including The Dalai Lama.

In late 2020, after 30 years living in downtown Manhattan and the East Village, Diane moved to Santa Fe, New Mexico. When not at her computer creating, you can find her hiking, road tripping, or breathing in all the beauty the Southwest has to offer.

Diane Hatz will be awarding a $20 Amazon or Barnes and Noble GC to a randomly drawn winner via rafflecopter during the tour. a Rafflecopter giveaway
Posted by Book Club Reviewer at 12:30 AM