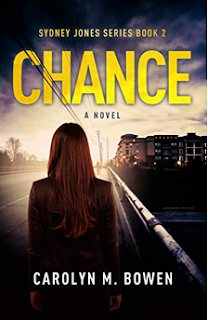 They took her lover. Getting him back could be the last thing she ever does…High-powered Atlanta attorney Sydney Jones never backs down from a case. So when her bodyguard and boyfriend is accused of murder, she’s determined to fight for him in court. Instead, the charges are suddenly dismissed, and he vanishes without a trace…Suspecting CIA involvement, Sydney takes on a lawsuit with Chinese Black Society ties and finds a startling connection to her missing man. But as she digs deeper, she discovers that someone may kill to keep the secret.Will this dangerous cat-and-mouse game reveal the truth or put a bullet in Sydney’s head?

My review: A former pop star that was hooked on drugs turns up dead, a past catches up, and a future that could be in danger.

Sydney Jones had been dating her body guard, Walker, for a while. The last thing anyone expected was for Walker to find the body of the dead singer and be a suspect.

To top it off, Sydney, a lawyer with a dangerous job, found out she was pregnant with Walker’s child.

Story had a lot of government and lawyer jargon, which made it kind of slow and complex. It had an interesting story line. I just wished it would’ve been quicker and to the point. I thought that we would focus more on the celebrity murder and Walker’s conviction. Actually, we don’t even hear about it again after like the first 2 chapters. In fact, the two don’t even work together on a case. They’re not even in the same country for most of the story. The book practically deviates from what I thought was the main story. It’s almost two different stories going in several directions (Walker in Cuba working some covert op and Sydney working a mafia case while raising a child – seriously, how much time had passed that the kid was already grown?)

Although there was some level of intrigue and excitement, story ultimately loses the reader with its maze of complexity and abundance of characters. As much as I wanted to like it, I just kept getting lost and losing interest.