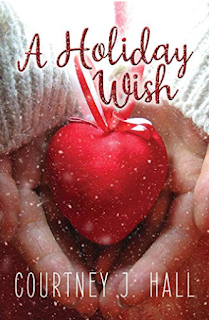 Noelle Silver has been a wedding planner for six years, and in all that time, the only bride she’s failed to get down the aisle is herself. Abandoned by her fiancé and disillusioned with love, Noelle is ready to pack it in and leave town when Brooke St. John, orphaned heiress, offers her a staggering amount of money to organize Brooke’s Christmas Eve wedding to a much older man.
Noelle is reluctant at first, but the payment Brooke offers is more than enough for Noelle to start a new life. It’s also an opportunity for Noelle to prove to herself—and her former fiancé—that despite her broken heart, she still has what it takes to pull off a wedding worthy of an heiress in the two months Brooke has given her.
​
But the best man, Brooke’s older brother Everett, is dead-set on stopping the nuptials. Will he succeed, driving the final nail into the coffin of Noelle’s career as a wedding planner—and shattering what’s left of her expectations of love?

My review: Noelle was glad to be rid of a man who proposed to her then cheated on her. She was! But I guess the quickest way to get over a wedding that didn’t happen for you was to plan someone else’s, right? Yeah right! But that was Noelle’s job as a wedding planner, even though her world was crumbling all around her.

I liked her sarcastic wit and biting humor. Sometimes she babbles when she’s in her sour and self-deprecating mood, which is pretty much how she’s been since the big dump. I get that she’s been in a rotten funk, but does she have to be so b#@chy, especially when some broad is throwing 25 grand at her to plan her wedding? For that, you push that sourness aside and just do it.

While planning the wedding, Noelle is also nervous about spending her first holiday as a single woman.  Can you say bitter part for one? Of course, her bitterness just means she’s human, which is relatable. But sometimes it can be a little much.

This was a pretty good read overall. There were some enjoyable moments like her drunken escape from her ex and his perfect girlfriend. She definitely gets more neurotic as we get closer and closer to the wedding date.

She was supposed to plan a wedding. The plan was NOT to fall for the bride’s brother.


It feels like hours have passed by the time I’m finally spent. My cheeks are stiff with dried tears and a throbbing, aching pressure has taken residence behind my eyes. I sprawl on the couch with the cool wet washcloth Erin’s given me draped over my face and listen to the dull hum of the TV’s low volume and the rush of water in the kitchen sink as my assistant washes my dishes.


“That’s not part of your job description,” I call. I sit up and rub the cloth over my face, trying to erase any sign of tears. This is ridiculous. I’m not the first woman to be dumped by her fiancé. I won’t be the last. But most of all, it’s not permanent. A bit of thinking has convinced me. Drew won’t be happy with Heidi of the Made in Taiwan wardrobe. Drew likes intelligence, and the few times I spoke to her did little to convince me that Heidi had anything going for her in that department. He likes ambition and drive—how many times has he told me how amazing he thinks it is that I started my own business? Yet Heidi’s idea of ambition seems to be sleeping with the boss. That might give her a temporary boost, but it certainly won’t hold his interest. Not the way I held it for eight years.
I feel better than I have all day, or at least since Drew made his big confession. I roll off the couch just as Erin shuts the water off and slides the last plate into the overloaded drain board.
“Thank you,” I say. “You didn’t have to do that.”
“Well, it didn’t look like you were going to.” Erin ventures a small smile, as if to gauge my reaction, and seems relieved when I laugh.
“Someday your teachings will stick,” I promise. “You look a little better. How are you feeling?”
“Better.” I think I might even feel hungry, but then I catch sight of the abandoned bag of croissants and know I can’t do it. Not yet. “Thank you so much for being here today. You have no idea how much it helped.”
“Why wouldn’t I?” Erin finishes drying her hands and hangs the towel on its hook over the sink. “I know you’re my boss, but we’re friends, too. Right?”
Warmth suffuses me. How great is she? “Right.”
“So…” Erin looks down at her feet, points a booted toe. “What about work?”
“Oh.” Right. Work. I’m kind of responsible for her income, aren’t I? Suddenly I feel awful for having her cancel my appointments. The two weddings on my books have already been paid for, the money allocated for certain things. If I’m not bringing in any more money, how am I supposed to pay her? But I don’t know. I don’t know if I’m ready. Oh, I know Drew will come crawling back. But the question is when. Do I have what it takes to plan the amazing wedding I promise each of my clients while waiting for my fiancé to remember me?
I race through the math in my head. The business account has several thousand dollars in it— more than enough to pay Erin’s regular salary and an adequate one for me. Erin’s cleared the next few days for me so I have until Monday to get myself together. I can do that. I’ve already paid November’s rent on the building, so I don’t have to worry about that. And it should only take Drew a few weeks to realize that he’s made the biggest mistake of his life. Silver Bells be fine. A few days off is all I need.
“Okay,” I say slowly. “You go in. Answer the phones and all that stuff. I’m going to keep the next few days for myself, though.”
“Understandable.” Relief relaxes her face. “I can hold down the fort until you’re ready to come back. However long it takes.”
“Monday,” I say with certainty. “If anyone calls, schedule them for after Monday. I’ll be fine by then.”
“If you’re sure.” She smiles.
But by the next morning, the denial stage is already over, and I’m not sure at all. Of anything.