Review: WHEN THE STARS ALIGN by Isabel Jolie 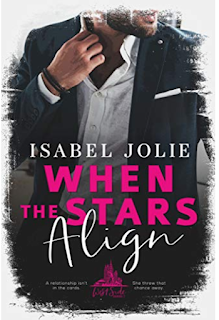 New York City. I can’t stand the place. But when an offer to move to NYC includes a fast track to partner at a well-respected law firm, there’s no way I can decline.

My move to the city goes exactly according to plan, everything falling perfectly into place…until the elevator door in my new apartment building opens, and I come face to face with my past.

Four years ago we parted ways, neither of us willing to change our future career plans. We were too stubborn, too ambitious, and refused to make sacrifices. To add salt to the wound, she ended the year dating my roommate.

But right now, staring at her beautiful face after all this time, I can still feel it. The attraction, the desire—it’s palpable. Four years ago, I wanted forever with Anna. Now, I’m a different man. A relationship isn’t in the cards. She threw that chance away.

But that doesn’t mean we can’t have fun…right?


My review: Anna never thought she’d see Jackson again. They haven’t dated or seen each other since college. Suddenly, he shows up again at her apartment building, because, apparently, he has moved in. This couldn’t get awkward…right?

But Jackson has no interest in revisiting the past, especially an old relationship.

At first, the two have animosity and old grudges. Could they be friends? Sure, after clearing up a few misunderstandings. But can they be friends and ignore their mounting attraction for each other, which has only gotten better with age? Sure! It’s called Friends with Benefits.

Story had an easy and comfortable flow that engages the reader. The Friends with Benefits deal was obviously a mix of fun romps to de-stress from their hectic lives, which I thought was a bit trite; however, I liked the comforting quality between them. From the characters’ POV, the reader journeys through the rituals of work and play, constantly hearing about how neither wants anything more. Of course, they wanted the sex without the intimate complications. Somehow (not surprisingly) they fall into a relationship.  But Anna has such an intense fear of commitment that she’ll do whatever it takes NOT to go there.

Can two people pretend…or were they just fooling themselves?

My rating: 3 stars
Posted by Sandra's Book Reviews at 9:21 AM