The Matchmaker Club
by Kayley Wood 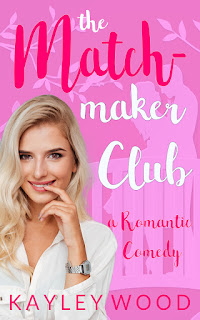 How do you loosen up a rigid, brooding billionaire with a broken heart? Nothing a game of Spin the Bottle, a skinny dipping dare, and poison ivy couldn't fix!

This feel-good rom-com is quickly becoming another fan favorite in the hilarious and sweet Club Series.

"If you like heartwarming romantic comedies then you’ll definitely enjoy this book!" - Amanda Beaumont - 5 Stars

It is an indisputable fact that Reed women are not marriage material.

Apparently, Reed women are not girlfriend material either.

Nestled in a small town in Maine, Cedar Gardens is the worn-down estate which the Reed women call home. But there’s one catch: It doesn’t belong to them. Almost seventy years ago, Mortimer J. Freeman bought the place for his long-lost love, Marlena Reed. Now, his great-grandson—and heir to billions—Lucas Freeman is in town with an agenda: to quietly reclaim the estate and Mortimer’s old love letters to Marlena while avoiding a family scandal. But Taylor’s grandmother has another plan: to play matchmaker with Taylor and Lucas before all three Reed women are kicked out of the only home they have ever known.

The problem? Taylor can’t stand the brooding billionaire, who doesn’t understand the gravity of a triple dog dare or the fun of blowing bubbles in your milk. Responsibility, reliability, and routine are Lucas’s mantra. That is, until the fiery Taylor schemes up a hilarious to-do list to break him out of his habitual shell and, in the process, turns his world upside down.

But falling in love wasn’t part of any of their plans.

Does Cedar Gardens have enough magic to bring Taylor and Lucas together, or will the Reed family curse win out in the end?

THE MATCHMAKER CLUB is the heartwarming, yet hilarious third installment in the Club Series. A New Adult Romantic Comedy full of lol moments, lovable characters, strong female bonds, and gives all the feels!

I slipped off my shoes and curled up into the side chair. The windows were open and the crickets were going full force under a clear night sky.

“Have you looked into any houses yet?” My grandmother pulled a needle through fabric meant to add to her collection of bed pillows.

“Have you changed your mind about what we talked about?”

“The man lives and breathes rules and routine. I couldn’t get through to him if I tried.”

“He’s been through a lot recently. Sometimes routine can be a comforting way to deal with it.”

“Do you know he was engaged not so long ago?”

She pulled the needle up and through the fabric again. “Beautiful woman. Vibrant. She’s a fashion buyer who travels all over the world.”

That did not sound like someone Lucas would end up with.

“What happened? Did he call it off?”

“From what the tabloids said, she did, and not long after he proposed.”

“She probably realized how uptight he is and decided to save herself a lifetime of misery.”

A creak sounded from the staircase, and we all turned to find Lucas standing there, his stare even more brooding than usual.

I turned away and sunk down in my chair.


My review: Reed women are not marriage material. That’s what Taylor led herself to believe. I mean, really all the fathers of the family’s children were unknown? Geez…


Not only was she not marriage material, but she wasn’t even girlfriend material.


But Taylor doesn’t mind because she feels that she is guided by her dead mom through the Matchmaker Club.


While working her job as a waitress, Taylor meets a man named Lucas or, as she liked to call him, Mr. Intensity.


I liked the easy writing style, and the story certainly had some humorous quips.  It takes a while to learn that Lucas is the heir to the home of the Reed women. While Taylor can’t stand his stony and arrogant demeanor, her grandmother is playing matchmaker. Ya gotta love her!


Story carries the enemies-to-lovers theme rather well; however, it was also laced with some complexity, especially with the business aspect of it. Fortunately, the author tries to keep it light and airy so not to drag down the reader too much.


It was a pretty good read. A story that any romance reader would like.

1. Surround yourself with some incredible, kick-ass women you call friends.
2. Don't worry about failure or mistakes. It's how you respond to them that makes all the difference.
3. An appletini is never complete without two cherries.

Kayley Wood will be awarding a $25 Amazon/BN GC to a randomly drawn winner via rafflecopter during the tour.