Excerpt: THE DISAPPEARANCE OF ROBIN MURAT by Gerald W. Darnell 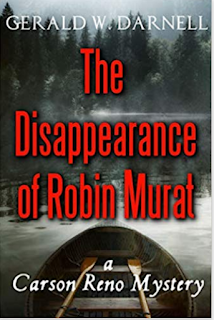 I knew the pounding in my head was because of a large knot behind my left ear – a knot left by something very hard and someone very angry. Aching arms were caused by my hands being uncomfortably tied behind my back, and probably to the chair I was sitting in. But, what I couldn’t understand was why my feet were so cold.
Reluctant to open my eyes, I just listened for a moment and tried to collect my thoughts. Before someone had rudely turned out my lights, I was standing in Jake Furman’s small kitchen making myself a whiskey and Coke while staring at a wrinkled note I found in his trashcan. It read: Dock 14, Midnight Wednesday.
Looking for Furman had consumed most of three days, and I figured he owed me at least one drink – considering all the trouble he’d put me through. Jake Furman, aka Nimmo, aka Orley, aka Spike, aka French, aka Sandman had enough names to start his own phonebook, and tracking him down had not been easy.
Wednesday was two days from now, and I was pondering checking out Dock 14 when everything faded to black. Now I wasn’t in Jake Furman’s kitchen anymore – I was somewhere else.
I could feel a slight movement underneath where I was sitting and hear water splashing, so I suspected I must be on a boat of some sort – one moving slowly and quietly. There was also the dry, putrid smell of swamp water – the odor that comes from water that has been standing too long without getting refreshed. Or it could come from the creatures that like to hide beneath its crusty surface. Either way it was easy to recognize.
It was night, or at least I thought it was night. It had been night when I was standing in Furman’s kitchen; but I had no idea how long I’d been swimming in this pool of darkness before coming to my senses.
I could also feel a cool breeze blowing against my cheeks – one frequently associated with a warm summer nighttime in the South. However, it was not cool enough to make my feet cold – there had to be another reason for that.
With my eyes still closed I tried to focus on sounds and surroundings – trying to get a better idea of my problems before completing my return to reality.
The sound of splashing water, the cool breeze, the putrid smell of water and movement meant that I was probably on a boat - and it was probably traveling somewhere through giant cypress trees in one of the many swamps south of New Orleans. It also meant that I was being taken somewhere I probably didn’t want to go. But there were other things, other sounds – sounds not so friendly.
Somewhere to my right I could hear the muffled noises of a man whimpering and crying; his words falling on top of each other, running together and making no sense.
To my left I could hear two men speaking softly in Spanish, occasionally laughing out at some unknown humor. My Spanish was limited, so not all their words were understandable; but the ones I did recognize were frightening. Those words told me that I would need to open my eyes before this situation got out of hand.
Slowly opening my left eye, then my right, allowing a moment for them to adjust to the shadowy light – what I saw made me want to close them again.
As suspected I was sitting in a chair, and that chair was in the front of a small boat. A dim glow was coming from a swinging lantern tied to the stern, but providing enough illumination for me to see my surroundings. Underneath the lantern sat a little man wearing a straw hat and using a small paddle to shuffle the boat through the dark water.
The two men to my left were sitting on the boat’s gunnel, laughing and joking with each other while sharing a marijuana cigarette – their dark hair an odd contrast to the light colored clothing they were wearing. Both were also holding .45 caliber automatic pistols and waving them in the air as they passed the cigarette back and forth.
The crying man to my right was sitting in a chair, like me, with his hands tied behind his back. He also had very dark hair and was dressed in light colored clothing – just like the two men with the guns and marijuana cigarette. But unlike those men, his feet were resting in a small white plastic bucket – an odd way to be sitting in a boat, I thought. Then I remembered my feet, my very cold feet.
Looking down I shuttered. My feet were cold because they were also resting in a small white plastic bucket, and the chill was from the cold concrete poured around my feet - concrete that was beginning to harden.
“Shit,” I mumbled to myself.
“Ah,” One of the men turned to look at me. “El gringo es ahora despierto."
“Yes,” the other man answered in English. “Now they will both be awake when they go swimming,”
“Pero de éste hormigón no es difícil,” the first man said, looking down at my feet.
“I know, but it will soon harden and we are in no hurry,” the other answered in English before pointing at the crying man. “We’ll send this one swimming now. His is hard enough and I’m tired of listening to him cry.”
In one swift motion they picked the other man up and threw him over the side of the boat – chair and all. I only heard him scream a brief “Ahhhhh” before his body slid beneath the dark water.
The two men looked at each other and laughed before turning to me. “Pronto será turno del otro gringo,” one said in Spanish, while showing me an evil grin.
“Yes Mr. Reno, soon it will be your turn,” the other man added.
“Shit,” I mumbled again – only louder this time.