Review: RIGHT FOR ME by Cindy Dorminy 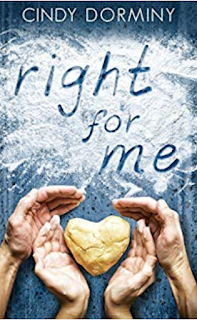 As she helps out a friend with breaking news, Shelby meets a tall, fine specimen that can bake the best cookies in the world. Both Shelby and Tommy have been burned by love, but neither can deny the explosive chemistry they had, which turned into a lot of kissing that night.


Tommy is so adorably dorky when he so obviously wants to take it to the next level with Shelby. If only he didn’t promise to take it slow for the next 2 weeks. He’s literally counting down the minutes. Dork!


They even get all tingly by joining hands in the cookie dough. Talk about a Ghost moment.


Well-written and witty, this is a sweet love story between an artist and a baker. It gets a little too lovey-dovey at times, but it’s pretty good overall. Because she comes from a corporate family and he comes from a religious family, the two try to keep their relationship “casual” without telling anyone. With parents such as theirs, could you really blame them? Her family was more into saving money and his family was more into saving souls. Oh, brother…Will their parents ruin their chance for happiness before it even starts?


I did think that they fell into this “casual thing” pretty fast, even though he did wait the two whole weeks. Shelby and Tommy couldn’t be more different, but one thing they did have in common: the family pressure and the strict expectations. The whole story was just filled with pressure and drama. And I understood why there were such hurdles for them, because, honestly, I wasn’t too sure if they were quite “right” for each other. Nonetheless, it was still a pretty good read.