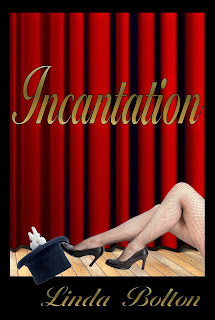 Tristen Bane is a famous magician whose dream was to best the legendary Houdini in death-defying acts. For Tristen, magic was life; for Christina, journalism was. When she is assigned to do a story on the magician, she falls under his spell--like, literally does, it seems with weak knees, shortness of breath, and all. Why was she feeling this way? Did Tristen really have satanic powers? Apparently, he's an expert hypnotists. I always wondered if that was real.


Story was interesting at first, until I realized Tristen's possessiveness and bad tempter. He was also a psycho for mutilating his audience. Who uses dead bodies and cuts people's heads?


Overall, this was a quick read with an okay story. It was mainly about how connected yet disconnected two people can be. Personally, they didn't make a good pair. I certainly wouldn't go for Tristen. Supposedly, this was "a tale of the magic of unconventional love."