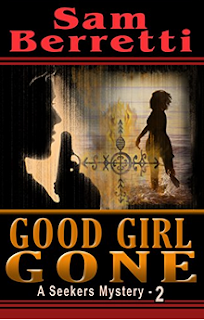 Someone will have the Devil to pay.
Doris Watson is an engineer by profession, a designer of kitchen appliances. But when she gets an emergency late night message, her mundane existence takes a decided turn into the bizarre and deadly realm of human trafficking as her secret existence resurfaces. She is an on-call agent for a firm named Seekers Worldwide, a front for a loose group of high-tech mercenaries, managed by one Della Jamay Charboneau and run by NSA agent, Sam Namath.

Someone made the mistake of taking Della’s niece. And that was a truly epic mistake indeed.

Della Jamay is no ordinary aunt. She is an assassin with a very short temper and a very large arsenal. Doris’ assignment from Sam—to handle her handler and keep Della’s body count low. Plagued by prophetic dreams and embroiled in Della’s most private matters, rookie Doris finds herself in way over her head. Together the two women fight for their lives against ruthless New Orleans criminals and a mysterious voodoo priestess claiming to be stealing souls with fire in this thriller about family love versus true evil.

Non-stop action and suspense propels these two tough women through a mystery shrouded in the darkest aspects of human behavior and crime. Time is of the essence—every hour, every day the girl is missing means the trail is growing colder and her fate more dire. Della Jamay is forced back to her home, her hidden past and memories she would like to keep buried. Doris is pulled with her into a morass so dangerous and unthinkable it is beyond even her darkest nightmares. Intriguing subplots, explosive situations, humor, heartwarming moments and a cast of highly memorable characters combine with a touch of the paranormal to weave a tapestry of memorable proportions in this contemporary romance adventure.


My review: Della Jamay Charboneau was not your typical aunt. So when she received a 4 a.m. call regarding her 14-year old niece’s sudden disappearance, she geared up.

Doris was an engineer and ex-soldier that “thrived on leading a life ruled by order and self-imposed solitude.” Lately, she’s been experiencing dreams within dreams full of symbolism and cognition—a gift she inherited from her grandmother, a “witch.”

As part of a secret covert organization called the Secret Worldwide Agency, Doris is assigned to work with Della, “the Devil’s Angel,” to help find her niece. Working with her trigger-happy disposition, Doris wasn’t too thrilled.

What could’ve happened to the girl? How could she have just disappeared from the mall without a trace?

Story grabs you from the very start. I liked the female duo—strong, fierce, capable, and kick-a#@! The women were very smart and astute with good instincts. The investigation was quite lengthy with too many angles, making it daunting at times. I also thought that there were a few too many characters that didn’t really add much to the story.

Well-written and enticing, story is awash with complexity and a strenuous beat against time. With infections, explosions, and psychedelic dreams, the case takes the reader on a wild and crazy ride. In the haze of this mass confusion, the reader somehow gets wrapped up in this and you just have to know: where is the girl?


Della Jamay Charboneau stirred in a dark room as her phone rang. It was very late, or very early, according to how you viewed 4am. Catlike eyes flashed open, the whites gleaming from her mahogany face. She woke alert. She always did. There was a reason for that, it was called survival.
“Hello.” Her voice was tinged with concern as she viewed the caller ID. You never want to hear from relatives at 4am.
“She gone! Oh, Lord! Our Baby’s gone, Della!”
Della sat bolt upright as she listened to her Grandmother’s plaintive voice. “What do you mean? Baileys gone?”
“She didn’t come home last night. She went out to the mall on the bus. And she never came home!”
Della went down the list of possibilities. That was what she was trained to do; friends, boyfriends, secret boyfriends, getting stranded, the hospitals. No, the ragged answers came back. Then the clincher, they had found her backpack at the mall. No 14-year-old walked away from her backpack. Not good, not good at all. Della felt her stomach tighten. Not good at all.
“I called Ethan, Ethan Boudreaux.” Her Grandmother’s voice was more subdued now. “You remember Ethan? He was the little scrawny boy from down the road. Well, he’s all grown up now and a detective. Bless his heart, he came right over and helped me look for her. He’s the one that found the backpack. He’s here, you want to...”
“Put him on the phone, Grandma.” Della cut her off and clinched her jaw.
Fifteen minutes later Della was standing in front of her massive walk-in closet. She pushed up on a clothing hook on the wall and a hidden panel popped open along the back wall. It revealed a concealed storage area lined with shelves and hooks. A light came on illuminating a cache of weaponry ranging from handguns with silencers to an AK-47.
Della Jamay Charboneau was not your typical aunt.
If someone had snatched her niece, they were about to be very sorry. Very damn sorry indeed.

Doris Watson took a deep breath. The night air was heavy with humidity and the smell of decomposing marshlands. A full moon painted the small lake in front of her with pale blue light. She walked out on a short, floating dock to get a better view. It bobbed slightly under her with each step. The small pontoons strapped to its sides moved restlessly in the water. She wanted a picture and raised her digital camera. It did its automatic adjustments, focusing and popping up its strobe. The flash popped and the image appeared in the viewing window on the back of the camera. Doris stared at the image with some confusion. The small lake was peppered with hundreds of points of lights. Curious, she thought. She gazed at the scene before her. The water was filled with logs. She set the flash off again without squinting through the viewfinder. The points of light lit up again in response to the light. Points of light reflecting back from the logs. But then she realized what she was seeing were eyes. Water sloshed nearby. She turned to see a dark form heaving itself up from the black water. It was big and very long. Its body seemed to take forever to leave the water. A bull alligator, wet and glistening lumbered up on the bank and turned to view her. Its scales were large and rough and black in the night. Its mouth opened, and showed rows of white jagged teeth. A rattling noise came from deep in its throat as it took a step in her direction. The dock under her feet moved suddenly, slightly rocking. Alarmed, Doris turned to scan the lake. She seemed to be drifting out into the lake. Turning back to the shore she saw the bull alligator was gone, but in its place was a hulking shadow of a man, arms crossed. She heard him laugh as she slid away on the platform—into the dark lake of alligators. The raft rocked softly up and down. Doris’ heart pounded in her chest as she clutched at her camera. Water splashed at her feet. She looked down in horror to see that the platform was slowly sinking as it moved out into the water.
This is a damn dream. Wake up, Doris!
An alligator bumped the sinking dock as it slid by. Its yellow green eye blinked as it watched her.
“Wake up!” she heard herself shout as she sat up in bed. She was soaked in sweat, and a shiver ran over her body. As she gasped for breath, she realized she was cold and disoriented. And she was angry. She stared at the glowing numbers on her clock. It was 5am and there was no way she was going back to sleep. She whipped the covers back, grabbed up her robe and headed for the kitchen.
For about a year Doris had been having to deal with the occurrence of alarmingly real dreams. Intense dreams that were often mystifyingly symbolic and at the same time precognitions of things to come. That was the part of her that was seriously deep, dark and creepy. She was trying to learn to deal with it, to recognize it when it happened and wake herself out of it.