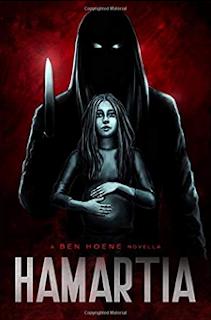 Natasha Cole was a sweet thirteen-year-old girl. She grew up in a fatherless home in the ghetto of Clever Rock; the murder capital of the country. Despite her bleak upbringing, she was a light in darkness with her uplifting and whimsical personality. All of that changed when she fell victim to rape. She was forced under the threat of death by her rapist to never tell a soul what he did...Thirty years have passed since that incident. Natasha is now a mentally ill drug addict in her forties. After thirty years of silence, she reveals the identity of her rapist. Almost immediately after this confession, a mysterious stalker murderously pursues her. Who’s after her? Natasha must maintain what little sanity she has left to solve this mystery and stop the attacker; while trying to stop her own demons in the process.

My review: The city of Clever Rock had the highest crime rate and it was rotting away with dirty politicians, drug trafficking, and gang violence. Only two words describes the city: Stay Out.

Natasha Cole was a bright and cheery girl only to have her world crash and burn when she was raped at 13. After that torture and humiliating ordeal, she just shut down. Then she became pregnant and miscarried.

30 years later, Natasha struggled with depression, anxiety, self-hate, and self-harm. A recovering drug addict, she finally revealed the name of her rapist (she never said anything because he said he’d kill her if she did.) Suddenly, Natasha gets the feeling that she’s being watched by some dark figure. She thinks it’s Nick, her rapist. As she loses more people in her life, Natasha sinks further into her mental abyss.

Soon, it is revealed that a killer is after her. The one who’s after Natasha will blow your mind.

I think this was a good story. You empathize with the character and her inner-demons. Her story is simple and easy to get into. An eerie tale.

It had an interesting title—Hamartia. But I wondered what it meant and how it correlated with the story. The cover was pretty good.

Natasha has remained on that couch for nearly two weeks; cutting herself off from the rest of the world. The duration of it consisted of watching old movies on the retro film channel. One film in particular that sent her deeper into despair was a prodigal son story about a lost child returning to their parents after a long period of decadence and obscurity created by a family rivalry. She’s forgotten the name of the movie.

This evening, she sleeps on the couch in the dark living room as the artificial lighting of the TV shines a blue colored spotlight in her vicinity. A late-night sitcom re-run is playing.
Natasha is oblivious that her front door just opened. A few moments pass. A shadow of an arm slowly appears on the wall Natasha’s couch is leaning against. The arm extends out toward Natasha with a mixture of compassion and yearning. The shadow takes the shape of a person and at the end of the other arm, a knife is poised to strike. The shadow moves closer.
Natasha opens her eyes and glances at the TV for a split second. An actor in the show looks into the camera, as if looking into the living room. The actor chuckles. “Natasha. Turn around and look up.”
Natasha's eyes widen. She turns and looks up. She screams in horror as she sees the masked killer standing over her; intending to stab her with the knife.
For a single moment, Natasha observes the intruder. He is tall and lanky; but still muscular. Dressed in all black. His mask is black with blank, white ovals stitched to the eye area. It has fringes on the bottom that drape down to his chest. It has long flaps on the sides that drape down to his shoulders; bearing a resemblance to classic executioner masks from Medieval times. He is wearing black surgical gloves; and black surgical covers over his shoes.
Natasha quickly rolls off the couch before the knife strikes. The cushion explodes with flying cotton. She frantically crawls and then musters up the ability to stand and run. She races out of the house, screaming.
She runs to her car. The tires are all slashed. The killer storms out of the house. Natasha screams and sprints out into the deserted street.
The killer chases after her, some ways behind. Natasha runs frantically away. She’d never ran so fast in her life—so full of adrenaline, she doesn’t know her body is almost completely out of oxygen. She is breathing so heavy and inhaling so much air, her throat feels like it’s swallowing razor blades. She is so scared, that it feels as if she has left her own body and is watching herself run; it’s a psychological phenomenon called depersonalization. The killer is still chasing from behind at a distance. He’s closing in on her. He’s very fast. Natasha yells out into the open. “Help me! Somebody help me!” Something as horrible as this is a rather common occurrence in the late hours of Clever Rock. The locals have witnessed drive-by shootings, drug deals gone wrong, fights, and gang wars. Many spectators and witnesses have been killed in the process. A woman screaming for her life is nothing extraordinary.
Posted by Sandra's Book Reviews at 12:43 PM