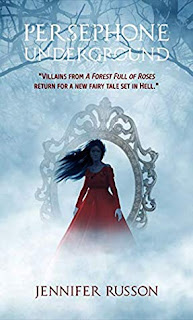 Seph Gonzalez is haunted by a DUI crash that left her with serious learning disabilities. She falls prey to Mami Wata and her strange grandson, who recruit her to clean their house of voodoo. Lured under the premise of a summer job at The Pomegranate, Seph is undeterred by the nightclub’s criminal reputation. Girls have gone missing, but it’s as though witnesses and local police have all been brainwashed.

Mami Wata and her family are coming for Seph as well – against a romantic backdrop of Ft. Lauderdale beaches and gondolas drifting down canals. She tries to escape, but it’s not so easy after falling in love with one of her captors.

In this faithful retelling of the Greek myth, a 17-year-old gives her personal account of what it’s like to live between two worlds. Her story unravels in a fever dream, tapping into an all too pervasive fear of gun violence happening at school.

It may actually be safer down in Hell…

Will Seph choose to reign there with Hayden, her dark Prince – or will she choose to stay with the mortals who love her on the surface?

My review: Persephone (Seph) Gonzalez was a young, gothic girl with pale skin and cuts so deep that they ran into her soul. She was deeply fascinated with the dead, which often sent her to the cemetery grounds. She was as haunted as they come.


Having to live in foster homes while her mom was incarcerated and living with learning disabilities, Seph had resentment (of course!) Not only was she a cutter, but she often “checked out”—daydreaming of different worlds. One day, a message gets seared into her palm: “Mami Wata wants you dead.”


Seph gets kidnapped by Mami Wata, the evil voodoo queen.


The happiest day for her was finding Hayden. The worst day was when demons from Hell came looking for her.


The story is told out-of-order, but, yet, the reader can still follow along. It had a few typos, which can be overlooked for the most part. I liked Seph’s smart-aleck commentary, and you can feel empathy toward the dark characters. It was bad enough to be held captive and enslaved against your will, but to do so with something inhuman and…scaly? Story was an interesting spin on the urban legend of Mother Waters (Mami Wata.)


It turns out that her captors were reincarnations of their own flesh—they were the undead and rulers of the Underworld. Seph becomes Hayden’s queen and gets brutally deflowered by his dead counterpart (not the human version she fell in love with.)


Would she be doomed to a life in Hell or privy to an oceanic Heaven? Can Seph escape her fate? Or did she even want to? Did she have the courage to die?


Normally, I’m not that into fantasy, but this was more than what the genre exemplifies—it was fantasy, mythology, fairy tale, and horror all mixed into one dark and alluring tale. It was oddly compelling.