Review: FRANKIE B AND THE GHOST SHIP by Andrene Low 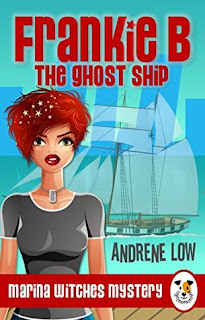 Frankie was a lazy witch that didn’t want to get evicted. Well, that plan worked out well when the landlady catches Frankie using her magic doing housework. Out they go—her and the dog she was not supposed to have.


Now homeless with a little cash, Frankie, along with her dog familiar, decides on her next step. Somehow she finds herself renting a houseboat. But it looked like she was rooked into it because her name was already on the lease. How did they know she would be there? It turns out that there was a vacancy in the Marina Coven, which was in need of a witch that could see ghosts on haunted ships.


This was an okay witchy story. I liked the telepathic dog and all the magic.