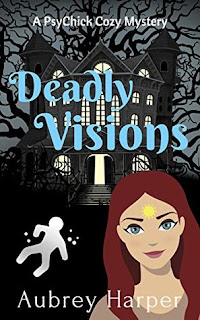 The same vision kept coming. A man was shot. Dead.


Callie’s roommate says that she was obviously meant to save him. But why her? It’s not like her involvement helped matters any, especially when she tried to save the last one and it didn’t work out.


But the signs everywhere kept telling her to go home—to her hometown in Ohio. Would the guy she kept seeing be there? One way to find out. She never anticipated to be sitting right next to him on the train ride over there. Too bad he was a jerk who thought she was a stalker. Did she have to save him?


Then a body turns up, but it wasn’t the guy from her vision.


Callie must sift through clues and hazy visions to keep the new guy from being killed. Of course, going home brought back old acquaintances and love interests. To be honest, these characters kind of got in the way. There were slow spots in the story. I wished it had a quicker pace. Overall, it was a decent read, even I felt that it wasn’t that focused on the case.