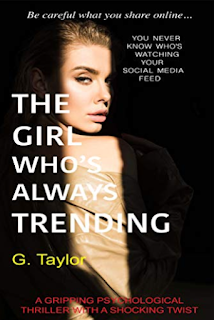 
“Your self worth isn’t measured by likes, comments, and followers.” (54)


Someone was following Amanda, tracking her online movements. The craziness all started when she announced her engagement online and posted photos of her ring. Amanda was a loner until the allure of social media gave her a sense of belonging and power. With social media, Amanda was never alone…but a sinister force lurked behind the walls of cyberspace.


Everyone was online, spending over 11 hours sucked into cyberspace. “It wasn’t enough to be liked in this world, you always had to appear to be liked.” (184)


Some of the commentary was insightful, like how we have become a throw-away society, having to replace anything that breaks. The character was insecure and narcissistic. Why was her social media account so important? Why did she need to be “liked” so much? It probably stemmed from her lonely and isolated childhood, but, clearly, she had an online addiction. Sometimes she can go and on about her insecurities though. I could relate to the some of the things she talks about, even though she talks very hightly on social media (like it’s so important.)


Story had a slow pace and a few typos. Overall, it wasn’t that thrilling or gripping.