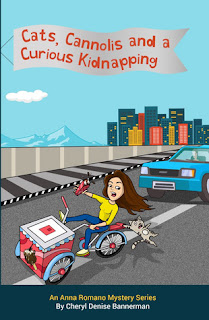 Anna Romano was a lonely Italian lady from the Jersey shore. At 37, she was an old maid, unmarried with seven cats. She's often asked why she hasn't found "the one." Her answer: "It could be (A)
from a lack of trying, (B) my sarcasm and independence is a turnoff, or (C) I find most men annoying and harder to clean up after than my cats." (10) Right on, girl!

The only fulfilling part of her life was her work as a mystery author. She was known as "The Author Cat Lady."

Ever since her book signing in NY, she's been getting strange calls and messages from an unknown sender. "Silence is golden." What did that mean?

Since the police seemed to be no help, Anna decides to investigate on her own in order to protect herself and her cats. She comes to the realization that her stalker might have some similarities to a character from her book. Then she gets kidnapped.

The character is witty with a good sense of humor. I liked how relatable she was with her down-to-earth persona and candid remarks, which were sometimes funny. Girl tells it like it is even in the face of danger. The plot can get a little chaotic with the different character perspectives (Anna, stalker, and the police,) but the track is fairly stable.

Will the police get to Anna in time? That's the question since Anna's kidnapping is the main event in like 80% of the book. I didn't quite see the connection between Anna's story and the kidnapper, but still, this was quick, little mystery that I found overall amusing.