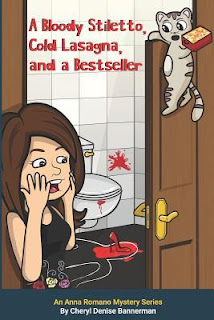 Anna Romano is back!

What better way to entertain a cat lady than with a cat fight at the supermarket? Somehow Anna gets involved in a case concerning a scorned wife and a cheating husband. She figures she might as well score an interview with the wife for her next story. The last thing she expected to find was the wife dead on the bathroom floor at some fancy party. Death by a red stiletto. It was a bloody scene. Although how much force would you need to be able to drive a stiletto heel through a human skull? Ouch!

Now the question: Who could've wanted her dead? "This poor woman was being cheated on by her husband, is attacked by her husband’s mistress, and then murdered the same night." (56)

This story doesn't have just one murder; it has TWO murders. And, of course, Anna would be at the wrong place at the wrong time.
Once again, Anna charms readers with her witty and candid commentary. This was definitely a juicier case than the last one.

My rating: 4 stars
Posted by Sandra's Book Reviews at 9:17 AM