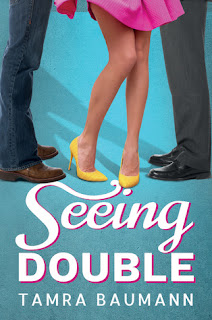 Dani vowed to find a more compatible man, hold down a job, and stay out of harm’s way.


Even with a soon-to-be ex-husband, living in her mother’s fame, and prophetic visions popping in her head, she still aims to make an improvement on her mess of a life. In addition to seeing crimes before they happened, she was also seeing DOUBLE—caught between an ex that she slept with from time to time and a friend/one-night stand.


While Jake (the ex-husband cop) wanted to get back together, Dani didn’t because she was a lousy wife and would make a lousy mother, especially if the kids inherited her abilities. Michael was a former NFL football star now working as a lawyer, whose wife left him for another woman. One thing they two men have in common is that they both want Dani.


Meanwhile, Jake and Dani work another crime case, one she swears will be the last one. Dani (now a realtor) was also helping Michael buy a house. The whole thing was wonderfully chaotic.


The two men were wonderful and Dani loved them both, but, according to her vision, Dani knows the man she’s supposed to be with and it’s not Jake or Michael.


Of course, that’s not the half of it. It would also seem that Dani’s life is in danger. If she testifies in court, she may not live another day.


Contending with two men, figuring out puzzling clues in her visions, finding a killer and keep from being killed herself—all while trying to make a sale and find her independence. So many questions that beg for answers in this novel.


I was intrigued by the premise and the character, but I thought there were too many angles. Who will Dani choose? Or will she choose at all? Who was the killer? Will Dani survive? And, if so, will she find her independence as well as the man of her dreams? It all kind of bubbled with excitement, but then it all watered down to mediocrity.