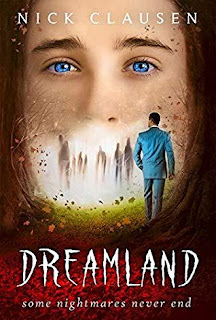 "Louie had always had life-like dreams, but he'd never had a dream continuing over several nights, like chapters in a book―not until he visited Dreamland." (8)

After a few visits, Louie learns that the man in his dreams was his father, who only died in the real world but lived on in Dreamland. The first half of the story mostly deals with Louie going back and forth to Dreamland as he tries to figure out the planets and the stars. It was a bit slow. It kept on going on and on like this. As Louie stated, "Not much [going on], actually. It's mostly just Dad and me, talking." (64) There's not much going on.

I thought this would be an interesting read, but nothing really happens. In fact, it kind of puts me in DREAMLAND.

My rating: 2 stars
Posted by Sandra's Book Reviews at 9:22 AM