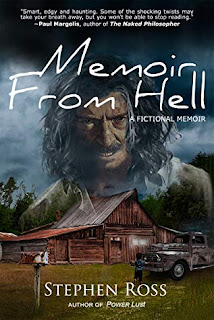 First off, what a creepy cover! It just had that spooky eeriness that gives off that foreboding feeling―like this is going to be one hell of a ride. And the man on the cover looks like Hugh Jackman from his Van Helsing days. It just added to the darkness of this tale.

"I’d just turned four when the terror started. That’s my first memory of the horror that run through my life—until I become a man and stopped it. Maybe it started before, and my screwball mind erased it. I don’t know. But what I do know. I survived it. I made it." (8)

Jake Malloy was a young man that suffered an abusive childhood, which planted the root of hate inside him. It all started from his early days in Hellridge, South Dakota, where hell began.

The whole story is a narrative told by the main character as he speaks to a tape recorder. The way he speaks is the way the story reads―he jumps around, talking about events that are not necessarily in order. It's like he talks about whatever pops into his head. There's no flow to it. For example, one minute he's talking about Dorothy stopping by for a visit, how he doesn't remember the bus ride home, and that the doctors say she might get better one day; then he quickly segues to how his parents met.

Story is fairly slow as it mainly dictates the emotional and physical trauma of his childhood. The scenes often felt repetitive and they weren't really pushing the plot forward. There was just a lot of drunkenness, a lot of crying, a lot of beatings. The entire thing was just a slow and uninteresting summary.

My rating: 2 stars
Posted by Sandra's Book Reviews at 7:27 AM