Excerpt: SANGRE: THE WRONG SIDE OF TOMORROW by Carlos Colón 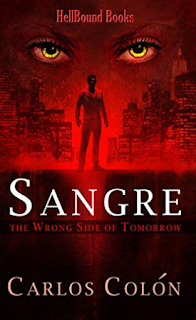 Hey, let’s face it. My track record of relating to women by the time I reached eighteen resembled the New York Mets’ won-loss record in the early 1960’s. Hell, my own mother died barely able to tolerate being around me. Add to that, my voyeuristic episode with Stacy Pepper and you could have branded an “L” on my forehead with a cattle iron without it looking out of place. I earned that motherfucker and I earned it hard.
It was probably why I interpreted the pensive gazes Carmen, the super’s wife, gave me as sympathetic. She sure played the part well, pitying the suddenly unattended teen as he tried to figure out how to hold on to the apartment all by himself. Her husband Gilberto had been a good friend to me after Papi left, always being supportive of me while Mami drank herself to sleep on a nightly basis, presumably hoping to wake up to a world where Papi and Dani were back and I was the one that was gone. Gilberto even encouraged Carmen to invite me over for dinner after school every once in a while. That’s when I started to notice her leering at me across the table.
Even though I was a month or so from being a legal adult, Gilberto looked the other way as I remained at the apartment on my own, refusing to move out to live with other relatives. And though he never verbalized it, he nodded with approval as I took a job to cover the controlled rent and registered for college at Hunter. I was becoming a man. And I was doing it on my own. Privately, he might have been curious as to why I wasn’t taking advantage of the situation and inviting a little feminine company to join me. Maybe he thought I was still mourning or maybe he thought I was just a good stand-up guy.
Sorry, Gilberto. Stand-up guy I was not.
Since Carmen was the super’s wife, she often took liberties with the spare apartment key and I would often come home from school to find my apartment tidied up, my dishes done and sometimes even my laundry folded. She wanted to help, she said, since I was alone and concentrating on my studies. And though I was a little weirded out, I have to admit that it was nice to sometimes not have those little things to worry about. There were even times when I would find little treats in the fridge like pasteles and flan.
By throwing myself into studies and the job I had gotten at a local insurance and tax preparer’s office, I never really found myself going through a mourning period. School and work occupied my mind sufficiently enough that by the time I got home and crashed into bed, the only thoughts that squeezed into this freshman virgin’s head were visions of Channel 47’s Iris Chacón giving me a bronski with her giant ass cheeks (what can I say, I was a sick fuck).
In late October of my freshman year, midterms were kicking my ass. On the last Friday that month, I came home after 8:30 p.m. exhausted from school and work. All I wanted to do was just throw myself into bed with my clothes on.
Without turning on the light, I dropped my book bag on the floor and took off my coat, tossing it in the same general area.
“Oye, dejaste de estar haciendo tanto reguero,” said the frisky voice from the bed, ordering me to not make such a mess.
Although I quickly identified the voice as Carmen’s, it startled me enough that I shouted and flick on the light. Carmen, not one to miss her cue, lifted the covers that were draped over her when the room lit up, unveiling her au naturel self.
“Avance,” she said, rushing me in Spanish. She only had ninety minutes before Gilberto returned home from his domino game.
Now, Carmen was not the most attractive woman in the world. She was maybe about twenty pounds overweight, which I didn’t mind because I liked ladies that were big and curvy. But while that in itself might have kept her off the cover of Cosmopolitan magazine, her khaki-colored, cigarette-stained teeth and her pungent café-con-leche breath likely would have steered most discerning eligible men into other directions. Carmen also had a bit of a mustache that often made one feel like he was making out with Omar Sharif. Also worth mentioning was the fact that her legs were hairy and led up to a mound of fuzz that resembled the top of Kramer’s head being squeezed between her thighs (anyone who watches Seinfeld will understand what I mean).
Despite the not-so-appetizing picture I described, when Carmen raised those sheets, I popped a woody that nearly broke my zipper.
Carmen saw the enthusiastic bulge ready to break out and moaned “Ooh...”
Happy to see such a willing participant, Carmen grabbed my wrist and pulled me under the sheets with her. Unfortunately for her, the 90 minutes she allotted were far more than we needed. I finished with 89 to spare. But virgin or not, Carmen wasn’t about to let me off the hook that easily. She pointed towards Kramer and put me to work. When I did, her thighs pressed so hard against my ears, I was halfway expecting my head to crack open like a walnut. Once my task was done, Carmen got dressed and told me she would return the next day. She said I needed the practice. And practice we did, at least five times a week over the next two years.
To this day I fondly look back at those sessions as the best sex I ever had.

Available on Amazon
Posted by Sandra's Book Reviews at 9:11 AM