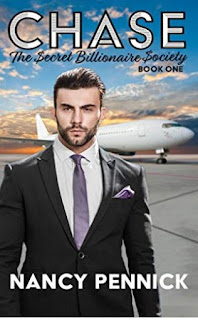 In a drunken haze during their thirtieth birthday celebration, the Secret Billionaire Society swore off their partying ways. They wanted to give back to society, and Mission Impossible became their motto. They just needed someone who would give the assignments. Enter the mysterious Mr. Smith.
Serious Chase Young is chosen first by this ominous, never seen Smith and goes from billionaire to pilot for a small airline in a day. Unable to use money to fix the problem, he’s tasked to dig deeper into the airline’s problems. Chase never expects to meet Grace Edison, the owner’s daughter, and immediately wants her in his life. Undercover, Chase can’t tell Grace the truth. Never one to back down, he accepts the challenge ahead of him, win Grace and save her father’s company.

My review: "The man behind the mirror. We’d never met him. We didn’t know what he looked like. Yet, we’d agreed to put our lives in his hands and trust him. We only knew his name—Mr. Smith. He was now in charge of us, the Secret Billionaire Society." (5)

Grace Edison was struggling to keep her father's airline in business. Then, in walked Chase, (one of the secret billionaires) who was now the new pilot for the airline. Although she knew they couldn't afford o hire a new pilot, she still couldn't shake how devastatingly handsome Chase was.


The first assignment in this series was given to Chase, who figured he could just invest some money to help the airline. But Mr. Smith wasn't looking for a "quick fix;" he wanted them to go deeper. Perhaps the airline wasn't failing because of sales and marketing. Could someone be skimming money instead?


“If a company has been in the black for several years in a row, continues to fill their planes to almost capacity daily, negotiates for the best fuel prices and even has a separate account for maintenance costs, why are they in the red?” (16)


Even though she had her suspicions about the mysterious man, Grace soon enlists Chase's help in trying to figure it all out. Meanwhile, the two are taken by the attraction and chemistry.


The series is a "Mission: Impossible" for billionaires. I thought the premise was interesting. There was a certain allure behind this secret society that wanted to make the world right. Drama, mystery, and love are in the air in this complex tale of a floundering airline. Will it fly...or will it all go down? This book had elements that I liked―secrets, spies, suspense, and a smoldering billionaire―but I have to say that I wasn't that captivated by the story. The romance was good, but some of the details concerning the family drama and airline problems were a little too complicated, which wore on me. There were also a few too many characters that really didn't help the story much. I think it would've been better with a little more simplicity and more focus on the two characters. But I think this book has a decent place in romance.

Grace Edison sat behind her desk at Falcon Airlines shuffling the papers in front of her. She didn’t want to look at last month’s numbers which had been consistently falling since the beginning of the year. Her father built the airline, and damn her brothers, she was determined it would still succeed. They could care less if they inherited the airline or took it over one day after their dad worked hard to achieve his dream. Her older siblings flew for Falcon but knew they could get jobs anywhere, anytime at more pay.


Someone cleared their throat at her open doorway, startling Grace. She fought for composure and looked away from her computer to see who’d come for a visit. The banker? He may be here to call in their loan. Breathe and smile. A flight attendant? She tried to solve their problems as quickly as possible and gave competitive pay, yet once a month someone seemed to find a better job. Game face.


“Oh.” Grace studied the man leaning against the doorway. She looked into his smoldering dark eyes, and if he used them the right way, they would cause her to slip right out of her clothes. He had brunette hair, carefully styled, short on the sides, swept back to one side on top. The close-trimmed beard caused her to internally shudder. Grace loved a man with a beard.


The man walking toward her was an inch or two over six feet, causing her to tilt her head. “Hello,” he said in a charming voice and extended his hand in greeting. “My name is Chase … Garrett. I’m one of your new pilots.”


Grace shook her head. “No, I’m afraid not. We didn’t hire any new pilots.”


“This is Falcon Airlines, if I’m not mistaken. I was told to meet with Grace Edison, Vice President of Operations.” Chase slipped his phone from his pocket, flipped through a few screens and produced an email signed by her father, Paul Edison.


Grace bit into her bottom lip as she studied the screen. “Must be some kind of mistake.” She didn’t want to make eye contact again, throw away all common sense and hire him on the spot.


Chase lightly brushed her hand as he took his phone back causing a chill down her spine. “Paul Edison.” He pointed over his shoulder. “From the sign on the door, you’re Grace Edison, either his daughter or daughter-in-law.”


“If that’s your job position, he trusts you.”


“Are you questioning why I have the job, Mr. Garrett? Because I’m a woman or his daughter or both?” Grace felt a fire in her belly. Why did she always have to defend the right to her job?


“No, because you are so young.” Chase lifted his eyes, connecting to hers.


Grace thought she saw an apology in them somewhere, and the look made her stomach flip. “It’s fine. Happens all the time.” She clamped her mouth closed. Why did I say that? Too much information. I am not daddy’s little girl who couldn’t get a job. I have a business degree! Now he won’t take me seriously.


“Do I report to you for assignments?”


“What did you not understand, Mr. Garrett? You are not a pilot for Falcon Airlines. We did not hire you.”