Review: IF YOU WERE HERE by Omar Martinez Morales & Stephanie Taylor 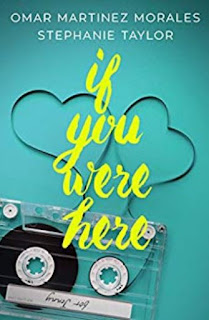 It’s 1986. Daniel wakes up on a waterbed, but…he’s never been on a waterbed. He somehow has gone to the time when his own mother was a kid, and, suddenly, his mother is now his sister. What?! But how could that be. He belongs in 2016.


Then we fast-forward to 2016, when a student is gunning down Daniel’s high school in a grudge against him. We back-track to 1986, when Daniel has found his iPhone (of course, it doesn’t work,) which seems to be his only connection to his old life—his “box of pixels, aluminum, and happiness.”


The book basically has two stories in one. In 1986, Daniel adjusts to his strange, new life, learning to enjoy the basics without the convenience of technology. During that time, he meets and falls in love with a girl named Jenny. Meanwhile, in 2016, time seems to be slipping away as Daniel confronts a dangerous situation and his holding on for dear life.


This started off kind of exciting, but the question still remained: how did Daniel wind up back in time and how does he get back to his future? Will he survive this mysterious space-time continuum?


I thought this was a pretty good time-travel mystery. I liked the well-formed plot and characters. It just seemed like things were getting weirder and weirder. I mean, Daniel gets Jenny knocked up and finds out about it in 2016, when he’s in a coma? Of course, the most obvious question was: can he change history, but, more importantly, should he?


Admittedly, story gets a little confusing with the constant back-and-forth. Also, it slows down dramatically about half-way through, becoming lengthy and dull.


This book started off well, but then it kinda flops from there.