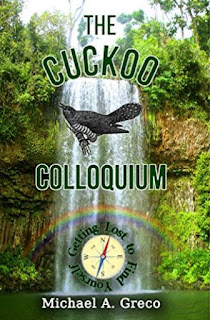 "The Cuckoo Colloquium" is an uproarious misadventure, a gritty lost-in-the-jungle story with life lessons for everyone!

The princess. The liar. The thief. The bully. The wuss. Five troubled teens from around the globe, plus their inexperienced driver and elderly chaperone, have unexpectedly been stranded in the exotic-bizarre rainforest world of Borneo.
It was supposed to be a year-end leadership seminar. It was supposed to help them grow, their minds expanded by the stunning landscape and the exotic wildlife.
In reality? Not even close.
Lost and separated in an uncaring rain forest with flying snakes, abusive primates, and marauding jungle life, it's an unremarkable little bird, a cuckoo shrike, that seems to be calling all the shots.
Each member of the Cuckoo Colloquium is forced to face their own unique challenges, both savage and fantastic, or die trying. Because as it turns out, the jungle has no intention of letting them go.

A fat boy, a rich beauty, a troublemaker, a thief, and a bully. Five kids at Cuckoo Camp for a colloquium. Where were the mentors? Instead they were lost in Tarzan Land.

Diverse characters are eccentrically portrayed in an erudite tale of debauchery and survival.

This was kind of a mix between The Breakfast Club and Lord of the Flies, and the outlandish writing style was a remarkable change of pace. Each dysfunctional character brings its own flavor of clash and high jinks, adding drama and tension to an unstable situation. Story was a little inane and convoluted at times. It felt too all over the place. I thought that it would be an interesting adventure of fantasy and fun mayhem. Instead, reading it made me feel like I was tossed in a whirlpool of exotic and weird with the plot going absolutely nowhere. I just felt confused most of the time. It definitely makes you go CUCKOO.

His name was Windell Ambrose Irvington the Second, but there was no way around Windy—he wore the nickname like a scarlet letter.
“The fat kid farted again!” The other four teens had laughed during the ride over, because he’d accidentally made wind when this ENORMOUS bug flew into the minivan.
Windy suffered from a difficult stomach, and when things surprised him, that was just the way his system reacted. It had been a big insect, though, with red eyes that buzzed, and flapped, and kicked around like some berserk jungle buzz saw. No doubt about that.
Overhead he heard a long hiss like a tire deflating. He scoured the green canopy above. Then he saw eyes, big and bad eyes, predatory eyes...
Windell Ambrose Irvington the Second passed wind and ran again.
Another wet branch smacked him in the face. His eyes stung but he didn’t stop. The creatures were already feeding on him; he could feel them in his hair, in his underpants. Blood was dripping down one leg, he was certain; something was snacking on him down there—something he had no desire to see.
He heard a loud CRAAACK, and then a tremendous ROAR—the footsteps of some jungle monster looking for its next meal in the loon labyrinth.
Windy ran faster than he had in his fourteen years of executive-grooming youth, propelled by the trumpet-like bars of stomach gas.
“I’m special, that’s why I’m here!” he cried, loping along, farting like a squeeze bottle of mustard, “I’m too young to be food! I have companies to manage, people to fire!”
Fate answered him as he was about to throw aside another big mop of leaves...
Nini Read, the Canadian girl, was kneeling in a clearing, head hunched, writing in a small notebook on her legs. Nini had rampaging red hair, a freckly face, and stunning, emerald-green eyes that reminded Windy of some snooty house cat.
Watching her through the leaves, he held his breath, afraid his panting would give him away. Breathe normal, be brave. You’re the croc-fighting Tarzan, the original Johnny Weismuller Tarzan, because he had a really cool yell—even if he was in black and white... You’re Tar-codile!
Tarcodile smelled its armpit again and sneered, empowered, as if the odor were a tonic. Then it strutted forward like the brave conqueror it was and sneered at Nini Read.
Stupid girls always ruined a good adventure.
Posted by Sandra's Book Reviews at 9:21 AM