Review: THE EX by Freida McFadden 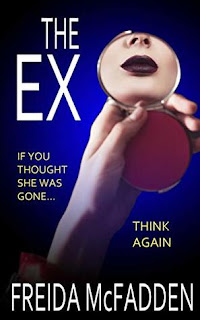 That one night: she thought he was proposing; he thought they were breaking up.


Was there someone else?


“Much more than I ever hated Joel, I came to hate this nameless, faceless woman. I wanted to get back at him for what he did to me. That was my intention from the beginning. When Joel dumped me that night, he took away my  entire  life—my  home,  my  friends,  my  dignity.  I could  never  get  any  of  that  back.  All I wanted was to even the score. I never meant to kill anyone. I swear.” (11)


Present day: Twenty-six year old Cassie is struggling to make her family’s bookstore business thrive again. The last thing she had time for was a relationship. Then in walks HD (Hot Doctor A.K.A. Joel.)


Meanwhile, the Ex quietly stands aside and waits…waits to see what Joel does and where he goes…just waits for him to come back.


I thought this story was interesting. It had that frightening suspense angle of the psychotic ex, but it also had that touch of human empathy  because you also get the ex’s side of the story, which relayed her loss, loneliness, and financial (and mental) instability.


It’s truly a rarity for me to like all the characters in a book. I liked Cassie’s love for books and her resolve to save the bookstore; I felt bad about the Ex’s money troubles and feared that she may end up in the street. I felt Cassie’s euphoric high at starting a new relationship, hoping the two would last; and I felt the Ex’s growing jealousy and resentment, hoping the two would break up. Since the book is written in the POV’s of the Ex and the New Girl, you feel for and enjoy these characters the most. The diary format can sometimes be too explicit, exacerbating the drama more than it should. Obsession is the key element here and the two girls have a lot of it. In fact, they torture themselves with it, and you hear all about it in their “diary”—it can get a little tiring sometimes.  I mean, it’s clear that they both had crazy issues. The constant shift between the two POV’s did slow down the pace in what follows for a standard psychological thriller. I wish it would’ve had more action and less whining. I wouldn’t necessarily say it was “unputdownable,” as indicated on the retail page, but it’s still pretty good.