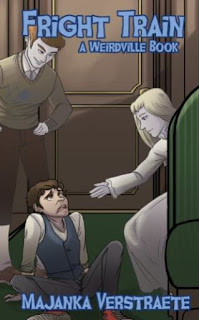 On the way to Grandma's house, young Charlie awaits a train―a train to Weirdville. After a short delay, he comes across a strange woman warning him not to board the train. I wonder why. Of course, never one to listen to strangers, he boards the train. Then he meets another woman with the same warning, including that the boy was in danger. He won't be pleased? Who's He? Before he knew it, Charlie was running from the conductor named Thaddeus and meets a couple of kids. Apparently, the train to Weirdville was not as weird as the train itself, which was filled with the living dead. Yikes! Now Charlie must escape before Mrs. Weird makes him one of them.


I liked how fantastic and smart this story was. While trying to escape the evil witch, he found two ghostly allies, who risked their after-lives trying to help him. After all, "even the dead can die."


Well-written and enjoyable. A spooky, little tale that's perfect for young readers! And I LOVE the covers on all of them.


THE DOLL MAKER by Majanka Verstraete 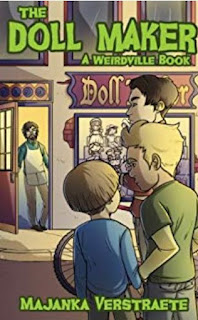 For as long as he could remember, Derek always had a creepy feeling about The Dollmaker, a toy shop in the town of Weirdville. He was especially creeped out by the doll his bratty sister kept wanting. Such life-like features. Kinda reminds me of the Chuckie doll.


"What would the world be like without Annie or creepy dolls?"


Before he knew it, he was face-to-face with his little sister's new doll. The one whose plastic skin looked like flesh! No matter how many times he admonished himself that toys were not real, he could not get over the fact that the doll breathed. That doll was alive and seeking a friend. The mystery is further embellished when Charlie discovers that the dolls were named after kids that have gone missing recently. Coincidence? Probably not.


What I like best about these books is how much they remind me of the Goosebumps series (my favorite as a kid.) Stories are so youthful, spooky, and full of adventure.


HOUSE OF HORRORS by Majanka Verstraete 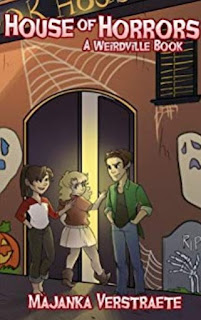 A carnival was coming to Weirdville, and Jacky couldn't be more excited. After some begging and pleading, she finally convinced her parents to let her go. Once at the carnival, the first thing she wanted to check out was The House of Horrors. Ooh, chilling!


One thing the kids didn't anticipate was once you enter, only The House of Horrors can let you out.


"In here, you will face your greatest fears, your worst nightmares. Only the strong-willed make it out to the end." ‖


Readers will root for these kids every step of the way. Love the irony in every book. Spooky, fun, and enjoyable!