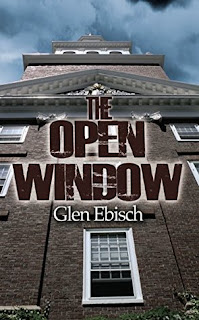 Professor Teller was dead, plummeted to his demise from an open window. The question remains. Did he fall, jump, or get pushed? Was it accident, suicide...or murder?

This might be just the sort of thing to get realtor Kate out of retirement and back on the crime scene, especially when Teller was her boyfriend's favorite professor. At the insistence of her boyfriend, Kate agrees to go undercover as a reporter to find out what was behind Teller's death.

Kate was a smart, clever, and spunky. She wasn't put-off having to contend with the snobby, young journalist she was paired off with, no matter how annoying she was or how smitten she seemed to be with her boyfriend. Kate obviously had a good head on her shoulders and had the inquisitive mind needed to solve this puzzling case of the open window. The case certainly gets complicated the deeper she goes. Some people thought suicide and others thought it was an accident. Sometimes there were a few too many angles to consider that I almost lost sight of the clues and suspects, but, hey, that's detective work, right? Perhaps there were a few too many characters, which weighed on the case.

For the most part, story was well-written and provokes the reader to find out the truth.