Review: KILLER AMONG by S.E. Green 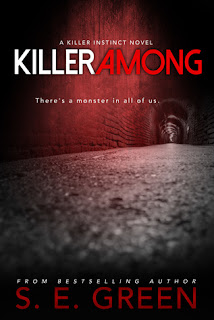 “Life is supposed to  be  pretty  routine,  right?  You graduate high school, work a summer job… help out at home, [and] get back into stalking…”


Lane has been trying to get back to what appears to be “normal” for a while now, if only she could shake off the annoyances of her family. Up until recently, all her kills have been warranted (e.i. her mother, her aunt, even her own copycat), but the last kills was purely accidental. Turns out that she killed the son of a District Attorney, who was ruthlessly known for putting away the bad guys.  And the guy she killed was known as a vigilante on the hunt for a serial killer, who apparently has re-surfaced in the eyes of the public. Not only is Lane dealing with guilt over her latest kill, but she’s also following a killer’s trail to make him pay.


The idea of a killer-killing killer was just an ironic and clever twist. It’s something you usually don’t see every day.


Written in 1st person POV, story is a simple chronicle of a witty teen’s investigative hunt.  I enjoyed her sharp and sarcastic mind along with her questioning morals on righteousness and normality.


“If things would’ve gone as planned, Scott might still be alive, I wouldn’t be on the Butler’s radar… and I wouldn’t be chasing a clock trying to beat the D.A. and her team in finding Teddy.”


Things become more complicated when a dead body turns up and Lane has to dispose it and protect someone’s identity. Story follows a series of strange events with secrets revealed in every corner.


Readers will be entranced by Lane’s time-ticking search, and, oddly enough, they will root for this killer-killing killer and her kind of justice, even if her justice was a little too violently graphic at times. Her heart may not be pure, but it bleeds for the innocent victims and secretly lurks beneath a load of wicked darkness. Her need to “re-balance and unbalanced world” was altruistic. However, was this true justice…or just a killer among? And who were the real monsters? Quick, easy, and captivating!