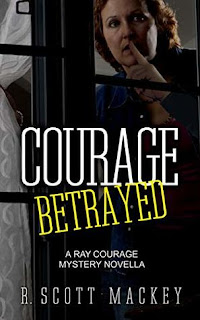 A woman thinks her husband may have killed someone. But Detective Ray Courage didn't have anything to go on. After all, there was no bloody knife, photographs, or anything else that would cast guilt on her husband. He just had a nightmare about killing someone. Not proof at all. Crazy, yes. But not proof.

However, it seemed that mild-mannered husband was experiencing a schizophrenic episodes―"Jekyll and Hyde" moments in which he was acting out of character. And the fact that the husband screamed out a murder that was reported in the newspaper recently was too big of a coincidence to ignore.

Ray Courage must find the truth. Was the husband a killer? Or were these allegations the result of a drunk and suspicious wife? Or perhaps this case was much bigger than he thought.

Well-written and insightful, this novelette is once again packed with mystery and intrigue. Of course, it wasn't quite as climactic as previous Ray Courage books, but it was still a pretty good read.

My rating: 4 stars
Posted by Sandra's Book Reviews at 8:19 AM