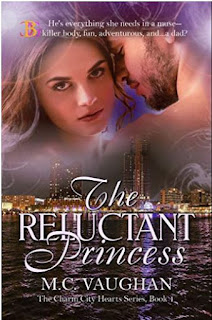 Nothing’s more important to twenty-five-year-old goth girl Zara Kissette than making her bones in the art world. When a fire destroys her paintings, she needs two things to fulfill the art gallery's contract for multiple masterpieces—a quick hit of cash for supplies, and a way to rekindle her creativity. Otherwise, she can kiss her career-making gallery spot good-bye. So she reluctantly returns to a lucrative gig as a fantasy princess/face painter, where she meets a hot, divorced dad who could bring a spark to her life…or ruin everything.

Brendan Stewart is doing all he can to keep the world a soft and stable place for his beloved little girl. While his ex breezes in and out of their daughter’s life, he’s determined be her rock. The last thing he needs is another relationship to balance with the rest of his life. That is, until a gorgeous princess shows up to paint faces at his daughter’s birthday party. Zara’s open heart and distracting curves tempt him to lower his defenses, despite having been burned before.

Their romance is all cake and bubbles—and lots of steamy sex—until Zara betrays Brendan's trust for her shot at the gallery, and Brendan takes her career into his hands and, well, screws it up. If they can’t make peace with each other’s mistakes, they risk losing the one person who loves them for who they truly are.


My review: Zara is a struggling artist. After a fire destroys her studio and all her paintings and art supplies, she finally receives an invitation to showcase her work, which would be great if they weren't charred to bits. Now she must come up with 3 paintings in 5 weeks! And there was just 1 speedy way to make the case she needed.

Brendan needs a face painter dressed as a princess for his 5-year old daughter's birthday party. Then he finds the spitting image of her favorite princess in Zara, who was a knock-out. Although Zara was never keen on kids parties, the need for cash outweighed her pride. Instantly, Brendan becomes allured by the "dark-haired, edgy," beauty. And, of course, why wouldn't the fake princess crush on Hot Daddy?

I liked Zara and her keep-it-real attitude. Like her, I didn't like the "ooey-gooey kids are special snowflakes" belief. Her message as the princess was "loving yourself and not hiding what makes you unique."

This was a pretty good fairy tale romance with a colorful edge and a few pumpkins on the road. Characters were candid and endearing, and their love was practically a rags-to-riches story. Story was decent, however, it did taper off here and there. It also had some odd phrasing like, "Grier punched her arms into the sleeves." Still, I'd say this story was pretty good.

As soon as Brendan Stewart clapped eyes on the princess on his stoop, the iceberg of tension in his chest melted. It had drifted into place two weeks ago when his OMG-so-busy-traveling-meetings-meetings-meetings ex-wife, Jess, bailed on the party for Emma.

He’d gone overboard with the party prep to compensate, and a real, live Ravenna had become his Hail Mary. Now that she was here? He wanted to go back in time and buy himself a beer.

Ravenna had migrated from the two-dimensional cartoon world and landed on his front stoop. Man oh man, he loved her in 3D. How had he not noticed those pouty lips in her pictures online? The woman in front of him blinked, and the thick fringe of her eyelashes kissed her creamy cheeks.

They stared at each other. Did Ravenna always give off a sexy vibe?

“Right here.” He smiled and tapped his chest. “I’m Brendan. Come on in.”

“That’s kind of the idea.” She swished around and stuck out her hand. “I’m Zara Kissette, children’s entertainer by day, starving artist by night.”

He grabbed hold. Her fingers were long, tapered, and calloused, and her grip was firm. She eyeballed his stubble and rumpled plaid shirt. Might’ve been a good idea to shave and iron.

“Hi, I’m Grier.” The second woman clumped into the house, towing a stubborn plastic crate behind her. He hadn’t noticed her behind Zara on the porch. “I’m the photographer and party grunt.”

“Can I help?” Brendan released Zara and stood aside to give Grier and the crate room to pass.

“What a gentleman,” she answered. “Thank you, I’ve got it. But I’ll be happy to give you my coat.”

She shrugged off her red trench and stuffed her gloves into one of its sleeves. He took it from her and hung it in the foyer closet. Cold clung to the material. The princess, Zara, hadn’t been wearing a coat. She must be freezing. Should he offer her coffee or tea to warm up?

When he turned back around, the two women were whispering to each other.

“You look familiar,” Grier said. “Do we know each other?”

“I don’t think so.” He forced himself to keep eye contact with Grier. She was cute, but Zara was in a different league. A dark-haired, edgy league.

“I’m sure we’ve met at least once. I have a memory for faces. Professional hazard, but I won’t torture you with twenty questions. The princess and I have a job to do, after all.”

Zara narrowed her eyes at her friend, then asked Brendan, “Is the birthday girl here?”

He almost didn’t hear her question over his silent don’t stare mantra.

“She’s out with my mom.” He glanced at his watch. “They’re due home in ten minutes.” He dipped his gaze to her cleavage. Whoops.

“What about your wife?” Zara crossed her arms over her breasts and tilted her head.

“Ex, actually.” He stuffed his hands into his pockets. “She’s not coming.”

“Oh, that’s…hmm.” She untangled her arms and darted her gaze around the house. “So, where do you want me?”

Where don’t I? He riffled his hair. Christ, Stewart, get it together. “Follow me.”

Hopefully she couldn’t tell she’d flustered him. He wasn’t normally this goofy about attractive women, but he hadn’t mentally prepared for this scenario. He was in dad mode. All the other women who’d be here today were either relatives or married moms.

Probably didn’t help he hadn’t been with anyone since the divorce. Who had time? Dadding, work, and the gym absorbed his undivided attention. Or it had, right up until five minutes ago when this scorching woman entered his house.

Now, he could barely focus on anything besides the princess.

He had to squash that, and quick. Today was about his kid and making her feel special. Besides, the princess was here to do a job. He’d bet the last thing she wanted was a dad hitting on her at work. One thing was for sure—it would be nice to run into Zara out in the city sometime.