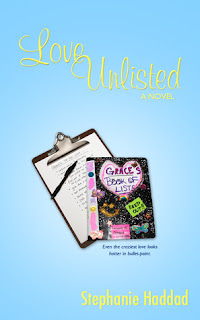 Grace is a woman that loves her lists. In fact, she makes a pro/con list for all her dates. Her current boyfriend, Mark, was certainly annoying with all his cons (picking on her eating habits, dressing better than her, patronizing tone, and bad in bed.) Things take a turn when Grace rejects Mark’s impromptu commitment. Who puts a key in a ring box?


Grace was a frequent dumper, even though she doesn’t mean to be. She doesn’t want to find somebody.


Grace has been meaning to take a break from her lists, but she just can’t seem to let them go. Very neurotic. Making a list for everything is importantly, especially when choosing the ideal boyfriend/future husband/potential father of my three hypothetical children. Was it so hard to meet a man with at least 20 pros on his list?


I related to Grace and her unorthodox dating method. But she soon realizes that not everything goes according to plan, which is where Colin gets thrown into the mix. Colin was every con on her list, but, yet, she felt a certain attraction that she couldn’t explain. She loses control around Colin and she hated it.


Witty, frank, and light-hearted! Story is full of Grace’s disasters. I enjoyed it very much, even though it could’ve used a little more proofreading.