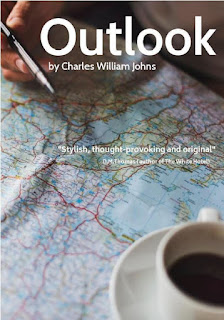 Benjamin Flew is dead – a suicide.
And Sam Wood wants to understand.
Two years ago, Sam (and seven others) received an enigmatic “goodbye world” email from
Flew, one of Sam’s former guitar students. Sam does not know any of the others who
received the email, but his curiosity about the circumstances regarding Flew’s death reaches
a boiling point.
After lying to his girlfriend and abandoning his studies, Sam embarks on a road trip – a quest
for discovery – accompanied only by his laptop, his phone, and an esoteric collection of
classical C.D.s.
Outlook, the fifth book from the “pen” of Charlie Johns, follows Sam on his journey as he
engages with Benjamin’s old colleagues – and runs face-first into a startling revelation.

Henry Purcell
In the midst of history and the ‘historical perspective’, if one looks hard
enough, one will always find an anomaly. Henry Purcell, the most profound
of all English composers, musician of the Restoration Period, optimist of
London (with its new society prototypical of the continentalism and wealth
we find in London today) found a quiet space to look back. Of course, like
Mendelssohn after him, this looking back displayed more of a magical past
than that of a real one (Mendelssohn’s encounter with Scotland is indeed
magical). What did Purcell do? Amongst all the pompous petitions requested
by Charles II, James II and Queen Mary, he found time to open up
an old dusty chest full of viols and dream up a ‘consort’ piece in the style
of a fantasia. The viola da gamba was on the decline shortly after the huge
success of the violin, but Purcell had unfinished business with this slow
and sturdy creature, with strings made of gut that whispered something
Tudor about it, and a craftsmanship that found its origin in Belgium yet its
technique in the Jews of Northern Italy.

Even the notion of ‘consort’ (ensemble) began to acquire connotations
anathema to the intellectual characteristic that classical music took on
around Purcell’s time; the consort made music a group activity for courts
and households (which then became a domestic activity). Children learnt
simple songs on it at home, sometimes with the hope of putting on plays
at functions. The consort was entertainment. However, it was the consort
of the viola that really cemented this attitude. Even the idea that choristers
learnt how to read music with a viola put certain virtuosos off the instrument.
Nevertheless, Purcell persisted, with both the consort and the viola.

One can imagine Purcell looking out from his window on Bowling
Alley East Street, catching the spires of Westminster Abbey through the
curtains. What is he thinking? Can he hear young William Byrd’s voice resound still, a chorister of Westminster Abbey all those years back? Is he
overcome by a desire to continue the lineage of viola consort music?
Chipped gothic features, rain worn walls, leaves blown on the breath
of God. Whatever that constant unknowing was that gave rise to Purcell’s
pensiveness, it came out in his Fantasias. Of course, Byrd had his fantasias,
but Purcell turns the continuous harmony of notes into cyclical, contrapuntal
Baroque folds. The thousand folds of musical garments drooping,
crossing, mirroring. And these very same folds also became the folds of
the psyche; the folding of the private experience of sound with that of the
public experience (and also that of the introspective musician with that
of the gregarious musician). Purcell’s composition is the ‘fancy’ (fantasia)
of the mind with all its contradictions and taboos. It is even the fancy of
the young Purcell allured by alcohol and women amongst the squalor of
London and its charred backdrop. Yes, Purcell could drink with the best
of them; raising and clunking tankards next to the open fireplaces, dark
wooden beams and low ceilings of the many labyrinthine pubs of a post
1666 London, immersed in spittled joyous song:

Come, come let us drink,
‘tis in vain to think,
like fools on Grief or sadness,
let our money fly, and our sorrows Dye,
all worldly care is Madness,
But wine and good cheer,
will in spight of our fear,
inspire our hearts with mirth, boys,
the time we live,
to wine let us give,
since all must turn to Earth, Boys.
Hand, hand about the bowl
ye delight of my soul,
and to my hand commend it,
a Fig for chink
‘twas made to buy drink,
and before we go hence we’ll spend it.

It was this distillation; the sweetness of English eccentricity, wit and
lightness, with a difficult Gothic backdrop full of darkness and sorrow, that
Henry Purcell would later be defined as the ‘misunderstood’ British tradition. That particular
drinking song by Purcell Come Let Us Drink composed of many
canons expressing the persistent repetitions of rebuilding and restoring
London’s city streets, the insistent lengthy litanies of royal inaugurations,
yet also the vulnerable repetitions of the blackbird, starling, nightingale and
crow in its natural habitat endlessly calling out, only half aware of the imminent
natural catastrophe advancing: flood, plague, fire, war.

Purcell’s Fantasias foresaw the emerging twists and turns of a new
world similar to how Carl Jung, three hundred years later, on a trans-Atlantic
liner to America with a certain Sigmund Freud, foresaw the darkness of
The Great War. Jung overlooked the vast ocean with a thought that would
haunt him to his death:

In October 1913, while I was on a journey, I was suddenly seized
by an overpowering vision: I saw a monstrous flood covering all the
northern and low-lying lands between the North Sea and the Alps.
When it came up to Switzerland I saw that the mountains grew
higher and higher to protect our country. I realized that a frightful
catastrophe was in progress. I saw the mighty yellow waves, the
floating rubble of civilization, and the drowned bodies of uncounted
thousands. Then the whole sea turned to blood. This vision lasted
about one hour. I was perplexed and nauseated, and ashamed of
my weakness.

In the mid-seventeenth century, whilst Purcell’s darker side was preoccupied
by the incandescence of mystery found in English forests, the
famous philosopher John Locke suggested that the forest was off bounds;
a human can only perceive qualities of the tree such as colour, shape and
size. The tree beyond perception would have to be left to the sceptics and
mystics. I wonder if Locke’s ‘discovery’ was simultaneously Purcell’s nagging
mystical obsession; if we can’t get to the ‘tree’ then maybe music can.

Henry Purcell continued to think about nature, and William Byrd,
and Thomas Tallis, and all those old heroes of the English tradition, and all
the shadows of ruins that resisted being known in an increasingly ‘knowledgeable’
epoch. One evening, after a few too many ales at his local tavern,
Purcell walked back home through his cherished city of London, across the
Thames and through Westminster. He smiled at all the mystery of the world
in that drunken, half-jovial state we all know so well in this era. He finally
appeared at his door on Bowling Alley East Street and gave it a knock. What
then happened, which is now famously documented, is that his wife refused to let him in on account of his current state of intoxication. He was left,
then, to walk the streets of London in the cold and rain. He subsequently
caught a chill which led to his death at the age of 35.
Posted by Sandra's Book Reviews at 10:02 AM