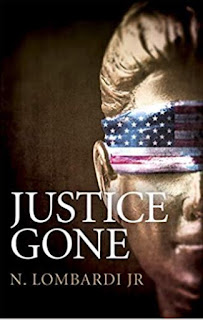 When a homeless war veteran is beaten to death by the police, stormy protests ensue, engulfing a small New Jersey town. Soon after, three cops are gunned down. A multi-state manhunt is underway for a cop killer on the loose. And Dr. Tessa Thorpe, a veteran's counselor, is caught up in the chase. Donald Darfield, an African-American Iraqi war vet, war-time buddy of the beaten man, and one of Tessa's patients, is holed up in a mountain cabin. Tessa, acting on instinct, sets off to find him, but the swarm of law enforcement officers get there first, leading to Darfield's dramatic capture. Now, the only people separating him from the lethal needle of state justice are Tessa and ageing blind lawyer, Nathaniel Bodine. Can they untangle the web tightening around Darfield in time, when the press and the justice system are baying for revenge? Justice Gone is the first in a series of psychological thrillers involving Dr Tessa Thorpe, wrapped in the divisive issues of modern American society including police brutality and disenfranchised returning war veterans. N Lombardi Jr. is the author of compelling and heartfelt novel The Plain of Jars.

Bruntfield, New Jersey, just another banal town in a part of the
country that nobody thinks about, was about to become famous;
or rather, more aptly put, infamous. People sauntered past
lackluster shops unware that in a few days, the lackadaisical
streets would bear the rabid frustrations that divided the nation;
a pus-like bitterness that was held in check by the demands
of everyday survival and the distractions offered by obsessive
consumerism and brazen media.

Some would inevitably blame the cascade of events on the
weather, since the origins could be found on a hot summer day
in 2006. Sure, just about all summer days are hot, but this one
was close to the record, and humid to boot. By the end of July,
the Northeast coast was suffering under a sweltering heat wave.
Despite the humidity, no one could remember the last time it
had rained. A hundred-year drought was predicted, they’d said.
Bruntfield, among the many places under this curse, had its
water supply so severely depressed that the city authorities were
forced to impose water rationing. As if that wasn’t enough, the
excessive load on air conditioners led to incessant brownouts.
With the weather nothing less than insufferable, suffocating,
oppressive, even provoking, tempers flared along with the
temperature. But the local situation, as bad as it was, was about
to get worse.

In the heart of this small town, just a block up from the bus
depot, sat Sliders, a rather successful drinking establishment
catering to young adults, and noted for its ecstasy-fueled rave
parties. At four in the afternoon, the owner, Joe Poppet, a burly
man with a thick red beard and a well-developed beer belly, was
staring out the large glass facade of his bar.
“Screw this heat, man.”

Joe was sweating because he didn’t want to turn on the air conditioning; as a rule, he didn’t put it on until a half hour before
opening. He possessed a rather cynical personality, considering
himself continually persecuted by life’s little aggravations. Now
it was the heat ramping up his electricity bill; soon it would
be the freezing temperatures inflating his heating bill…always
something. His worries constantly exceeded his hopes. He was
sort of a “glass-half-empty” man.

Rudy Glum, the shaven-headed bartender, was an easygoing
optimist, a “glass-half-full” kind of guy. He was whistling as he
washed the glasses in the sink behind the bar. “Tell me about it,”
he chuckled. “I hear ya, buddy.”
But Rudy’s sanguinity did not rub
off on Joe. “There’s that
guy again.”

“That fucking guy we saw yesterday.”

“Oh, yeah, he’s probably from the bus depot. Lotta homeless
hang out there.”

Joe continued to stare out the glass facade, feeling helpless.
“For Chrissakes, why can’t the city do something and get rid of
those bastards. They’re a fucking eyesore…it’s bad for business.
Probably got diseases too.”

Rudy finished drying the glass in his hand and hung it up
on the beer mug rack. “Yeah, it’s a goddamn shame,” he said
noncommittally, trying to get these glasses done before the
evening crowd surged in.

“And we’re opening in an hour. Ladies Night tonight.”

Rudy said nothing while reaching for another glass from the
sink behind the bar.

The bartender froze with the glass still in his hand. “And tell
them what?”

“I don’t know, tell ‘em there’s someone suspicious hanging
out on the corner…trying to break into cars or something. That
way they’ll come fast.”

Reluctantly, Rudy put down his dishrag, picked up the
phone, and dialed 911, not feeling good about it at all.
Patrolman Rafael Puente might well be considered an
unattractive man. A pencil-thin mustache above diminutive lips
made insignificant by his large inflated face, gave his head the
appearance of a balloon with a cartoon countenance. His acnescarred
skin oozed sweat as he studied the thin disheveled man,
shirtless with unkempt hair and a scraggly beard, standing three
feet in front of him. “You were trying door handles on cars, eh?”
The man’s body wavered, but his gaze was focused hard on
Puente’s eyes. Then his own eyes darted left and right, revealing
his vacillation on how to handle this situation. “I don’t know
what you’re talking about.”

Puente began playing with his baton, twirling it down, and
then back up smack into his palm. Rotating it down, rotating it
up, like a long yo-yo…like the tail of an agitated cat ready to
pounce. “Give me a language…tell me a language you speak in.”

Puente’s tone rose in hostility. “Tell me a language you speak
in.”

The humidity was so dense it felt like a sponge rubbing
against their skins; so thick you could almost take a bite out of
it and chew it.

“I want to know what kinda language you speak.”

“Yeah, that’s right. I can speak Mongolian, Cambodian…” Fox
came closer, boxing in the man they were questioning.

The figure in front of them became fidgety. “What do you
think I speak?”

Fox put his hands on his hips. “I don’t know, you tell us.

Puente interrupted. “You know, it seems I see you all the
time, and all the time I gotta say something to you. Do you enjoy
that?”

“Oh yeah, I love bumping into you all the time.”

The bearded man looked to his left and right, looking for an
escape route while at the same time desperately trying to tell
himself that these guys were just American cops and not the
enemy in Iraq. He was trembling with the effort. “So, what do
you guys wanna know?”

Puente’s baton was still twirling with a pent-up belligerence.

“I asked you already.”

“You trying to open car doors?”

“Well, I don’t know what you’re talking about.”

“I don’t know, don’t know what you’re hassling me for, man.”

“You don’t need any?” Fox voiced with a rising tone of
contempt.

“No, I don’t drive, I don’t vote, no credit card, and I don’t use
my passport anymore.”

“So what’s your name?” Puente asked.

Puente, his question answered, went off on a new tack. “You
know, I can take you to jail right now…loitering, suspicion of
burglary.”

“You don’t have anything better to do?”

“What’s in your knapsack?” Fox interjected.

“Why? You wanna search it?

The bearded man swung his bag off his shoulders and
handed it over. “Knock yourself out.”

This was getting hard. Just cops, he reminded himself, but he
suspected something worse.

“Where you’re standing, on the ground.”

Felson plopped down on the concrete pavement.

“Put your legs out in front of you. Stretch them out.”

Just do it. He did so, his arms at his sides supporting him.

“Put your hands on your knees.”

No, this is a mind fuck, man. He ignored the command.

“I said put your hands on your knees.”

Realizing he didn’t have much choice, Jay drew his legs up
first, then put his hands on his knees.

“Stretch your legs out.”

He removed his hands from his knees and stretched out his
legs.

“Put your fucking hands on your knees.”

“Give it a try, lean forward and put your hands on your knees.”

Fox was going through the items found in the knapsack.

“They already got stamps on them,” Fox noted. “How come
you haven’t mailed them yet? You know, just slip them into a
mailbox. There’s one right over there on the corner.”

Puente was still toying with his baton. “Let’s take him in
on a 4-96.” Four-ninety-six was police code for handling stolen
property.

Jay Felson, feeling an ache in his lower back, removed his
hands from his knees, once again placing his arms in back of him
to support himself.

“Hey, what the fuck I tell ya! Hands on knees!”

This time Felson was not eager to comply. He remained
motionless in silent defiance.

Puente then reached into his back pocket and slowly,
deliberately, put on a pair of latex gloves. He thrust one gloveladen
fist in front of Felson’s face. “See these fists?’

“They’re getting ready to fuck you up.”

“Put your legs out, put your hands on your knees”

“Hey, I’m sick of playing games, which one is it!”

Puente slapped him in the head.

“Put your hands on your knees!” he yelled, giving Felson
another slap.

Puente slapped Felson’s head a third time. Felson stood up,
tired of being hit while on the ground.

Felson put his hands in front of him to display supplication.
“Hey, hey all right!”

Both officers began to hit Felson on his legs and side with
their batons, and he did what came instinctively—he ran.

They grabbed him, got him down on the pavement, pressing
his face against the concrete, and the real beating began.
“Okay, okay, I’m sorry, sorry, man.”

“Put your hands behind your back,” the two cops shouted,
twisting his arms.

The two cops were on top, Puente with a knee in Felson’s
back and Fox kicking him. “Stop resisting,” they both yelled in
turns.

A second patrol car pulled up with sirens blaring and flashers
blazing. Two more officers sprang from the car and piled on.

One of the new guys, Victor Fratollini, tasered Felson, zzzzt,
and Fox began walloping him over the head with his stun gun.

Another unit pulled up. Two more cops, two more assailants,
and seeing Fratollini smashing the homeless man’s cheekbones
with his elbow, joined in the fracas.

Zzzzt, zzzzt, zzzzt they tasered him again and again.

Someone pounded Felson’s head into the pavement.
“Dad help me!”

A pool of blood formed beneath him. The six police officers
relentlessly pummeled him, the scene resembling a feeding
frenzy of enraged carnivores…until Felson was no longer able
to call for his father.
Posted by Sandra's Book Reviews at 10:03 AM