Review: DIARY OF A ONE-NIGHT STAND by Alexandrea Weis 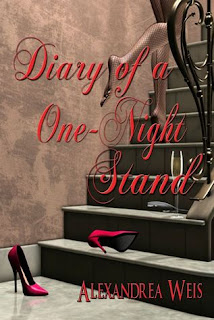 Kara is a woman in her mid-40’s and only looking for a one-night stand, aiming to make it count. But will it just be a one-time thing?


During that night of passion, the two reminisce on their childhood. This is only supposed to be a one-time thing, right? After all, Kara is a mom first, a lawyer second, and doesn’t have time to be a woman. Until that night…It was just sex with no prospects or relationship. But Scott is a man that always gets what he wants and doesn’t give up too easily.


The guilt of that one night eats away at Kara as she doesn’t want to be like her mother—to be promiscuous and go through all these different men. Still, she resumes her mundane life as a wife and mother. Her 52-year old husband, who recently had a heart attack, suspects that there’s more going on than just business between Kara and Scott. And he certainly retaliates with his hot temper and jealousy. I don’t know why Kara even married Cal. He’s such a demanding jackass. I mean, who dishes ultimatums? If you don’t marry me, I’ll leave you. If you don’t give me a child, I’ll divorce you. Really? Geez, it’s a good thing Kara had Scott to vent and release her pent-up energy.


“She didn’t realize until that moment how the short time she had spent with Scott had been a needed respite from her weary world.” (90)


Pensive and thought-provoking, story provides an interesting insight to the ramifications of a one-night stand. The best thing is that this doesn’t read like a diary. Well-written and enticing for the most part. Of course, the legalities at the end made it a little dull, but this was a good read overall.

My rating: 4 stars
Posted by Sandra's Book Reviews at 9:25 AM