Review: A TIME FOR PENANCE by Robin Storey 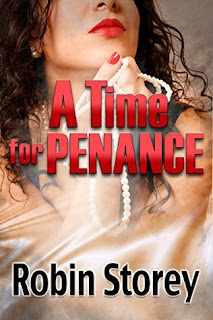 The prologue begins with a wife celebrating an anniversary by poisoning her cheating husband. At first, she doesn’t think she can go through with it, but then he takes a bite and there’s no turning back. Suddenly en route to the hospital, she’s sweating bullets, hoping and praying that he doesn’t survive. I thought this scene was an excellent start!


Now widowed, Eva heeds to the “love em’ & leave ‘em” mantra with her endless strings of one-night stands. Still plagued by the haunting visions of Charlie, twenty years later, she wonders if there might be something more to them than just guilt.


Story had a compelling start, but then soon began to contain lagging intervals, especially where the religion was concerned. I guess, as the title suggest, this was Eva’s “time for penance”—a confession of sins and self-punishment. And, with that, she begins by confessing her sin of murder to a priest, which introduces a monologue of how it all began, starting with Eva’s first meeting with Charlie, outlining their rocky marriage, and concluding with her decision to kill him. It was basically a confession.


But rather than go straight to penance, what if you’d have the option to undo your sin—to “enact your penance by travelling back to the past?” If Eva were to go back twenty years, would she still murder Charlie?


The book definitely had an interesting premise (I just love time travel stories,) but I couldn’t get past the constant lag. It just felt like the story took forever to pick up. Okay, is she going to kill him again or not?


Plot was slow and full of uninteresting characters. I really just wanted to get to the best part; however, it was fascinating how Eva managed to miss Charlie’s loving ways from the past and also hate him for what he was about to do in the future.


Still, overall, the writing was pretty good, the pace was kind of slow, and the plot was rather mediocre.

My rating: 3 stars
Posted by Sandra's Book Reviews at 7:41 AM