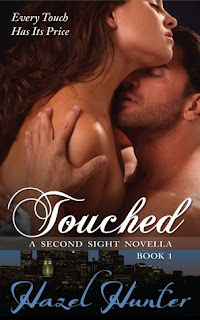 Isabelle is a psychic with the gift of touch. All she has to do is touch something to get a series of visions about it, which, at times, can be overwhelming. That’s why you always see her wearing gloves.


Right now, she’s on the case for the missing daughter of a retired FBI agent, who brings in his protégé for assistance. However, Mac doesn’t need a so-called “psychic” to get in his way, even if she did have the most ravishing legs he’d ever seen. Even though they may not see eye-to-eye, the two make an electrifying team and neither will rest until they find the kidnapper. Of course, they make time for a romp in the sack though.


All in all, this was an easy and enjoyable read, but it just seemed that the story didn’t concentrate on the missing case so much and mostly revolved around the two having sex. And she kept the gloves on the whole time. I mean, we don’t even find out what Mac’s deal with this woman from his past. I guess we’d need to find out on the next story of the series. Still, the ending was too convenient and weak. I wish we would’ve had more psychic action rather than regular action.

My rating: 3 stars
Posted by Sandra's Book Reviews at 7:22 AM