Review: THE CON ARTIST NEXT DOOR by Sophia Han 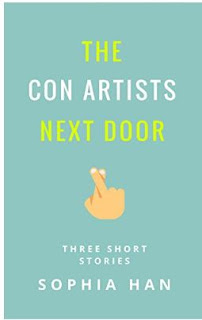 
In "My Boyfriend, My Thief," a woman wonders how money could be strangely disappearing from her bank. But when the thief somehow gets to the last of her money from her box, she begins to ponder her own sanity...until she discovers the cold truth. "Mark, who I always thought was my hero, was actually my villain." (12)


"Confessions of a Phone Scammer" gives a behind-the-scenes on those tricky phone calls and what happens when guilt settles in.


"His dreams had to be my dreams" was the mantra Rachel recited when she married Aiden in "For Richer or Poorer." But when it seemed that Aiden was being scammed by a nameless company, she couldn't help but feel that her "reality" was putting a damper on Aiden's "perception."


Money may be the root of all evil, but, in this life, you can't live without money. And these characters make a point to do whatever it takes to get it, to make more money than they ever could at their J-O-B, which stands for "Just Over Broke." Yep, that's the song of the poor worker. These stories were so relatable that I could not have believed them anymore if it happened to me (and I've had similar experiences, too.) I mean, who isn't tempted by that "get rich quick" scheme? Who doesn't strive for that "better life?" But if something sounds too good to be true...well...The best thing about these stories is that there's something for everyone.

Witty and frank, these lovable shorts are a delight! The Con Artists is a beacon to life on the wrong side of the tracks. I look forward to more stories by Sophia Han.