Review: A TASTE OF MAGIC by Alaine Allister (Book 1) 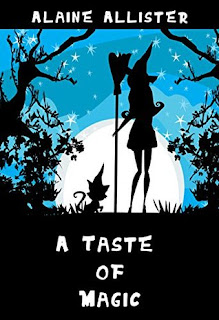 I didn’t like the velvet cake mystery and this series is set in the same town of Sugarcomb Lake, but, hopefully, it would be better considering it’s supposed to have magic. I mean, it says so in the title for godsakes!


Clarissa is Liana’s best friend. She’s jobless and indebted to a family home that she can’t let go. Of course, this story has another cat—an annoying stray of a cat that won’t go away. Again, there’s too much cat in the story. Too much talking to it, too much of it just hanging around. Story was slow.


When the murder happens and the big shot reporter comes sniffing around, Clarissa throws herself into the investigation to prove her journalistic skills. Things get better after a lightning strike encounter and a strange girl pointing out that her “aura has a touch of magic.” Cool! Afterwards, the investigation becomes much more interesting than the cake series, especially after finding out that Clarissa is a witch. However, there was hardly no magic involved. Probably because she just barely found out and had no practice in the craft.


Overall, this was a good start to the series, but I thought it was a little slow and it could’ve used more magic. And what was up with the double title, Happiness is a Smoking Gun?

My rating: 3 stars
Posted by Sandra's Book Reviews at 7:52 AM