Review: RED VELVET CUPCAKES TO DIE FOR by Alaine Allister 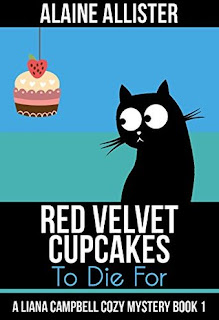 Liana Campbell is the new owner of a coffee shop and bakery with a college slacker kid for an employee. You could just feel her frustration for the young Joel as he screws up again and again.  And this endears the reader to Liana, who is just trying to get her name out there and make the business a success in a such a small town.


It takes a while to get to the dead body though.  When we get to it, the characters mostly obsess over the shock of the discovery (of course, we automatically know that what they discovered was a dead body) that it takes away some of the surprise. I mean, what was going to happen. So when they say what they saw was “a body,” it wasn’t anything to me.


The gossip mill ran wild among the townspeople, which was unnerving and useless. And what’s up with the cat that kept hanging around? And why was Liana talking to it?


Of course, speculation goes that Liana might’ve had something to do with the murder since she’s the one that discovered the body. Something to do with a strange murder can’t be good for business, so she aims to solve the case and clear her name. But the thing was that she was terrible at sleuthing. Still, you commend her fumbling efforts.


There was too much time spent talking to the cat and the pace was lagging. Plus, there were no velvet cupcake.


This book just wasn’t that great.

My rating: 2 stars
Posted by Sandra's Book Reviews at 7:52 AM