Review: WHAT IF I GOT DOWN ON MY KNEES? by Tony Rauch 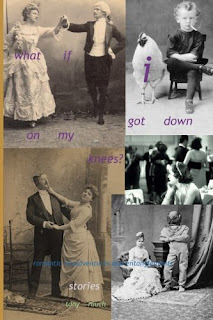 Described as "a series of romantic misadventures and entanglements," the book mainly consists of colorful vignettes of oddball characters that don't necessarily involve love and relationships. For example, "In the Dust" was about dogs? Mmmm...


Judging by the subtitle, I anticipated comedic tales on the struggles and downfalls of love, marriage, and relationships. I mean, getting down on your knees is a symbiotic element of the whole marriage thing. I found it strange that these stories had nothing to do with that. Instead, they were eclectic, ranging from subject matters of music, religion and football, new neighbors, a father's secret, and shiny things.


One of the few tales that involved dating was "Lesser Gods," which was about a guy raving on and on about the excitement he felt over a girl asking him out. He was even going so far as to ask people on the street if he could hug them. Hug them? Really? Weirdo.


Another weirdo was in "Congratulations," which involved a pregnant guy. WTF?! And this stranger was trying to extract the baby??? What!


For me, the stories didn't really make any sense. They tended to ramble aimlessly with little to no direction. I mean, what was the point in all of this? What was the theme that tied these wacky stories together? I usually don't mind if a story has some wayward style or bleak irony. Yes, for some stories, the sky is green and the grass is blue, and it can still make sense in some interesting way. I'm sorry to say that these were not interesting. They were more odd, confusing, and just plain weird.

My rating: 2 stars
Posted by Sandra's Book Reviews at 8:16 AM