Review: WIND DOWN by Mark Ewig 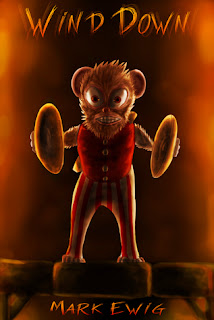 Aaron Starks, a young college student, is finally moving into his own apartment off campus. What does one really expect when you have four guys living together? Beer, parties, chicks—the usual, of course.  That’s how Aaron pictured how life would be….until he meets Jessica.


Although the writing style was fairly average, the characters, in general, were expressly unique and relatable.  Story had some areas that were compelling and others that were a tad mundane. However, it maintains a consistent flow throughout, never lagging for too long.


Mystery and drama are keys in this basic, yet intriguing, prose, which surrounds the life of our Aaron. The odd thing was the occasional blackout he would experience. Blackouts were bad enough, but why was he seeing and hearing things during his wake? What was wrong? Was he going insane? And could it have anything to do with what happened in college?


“The monkey’s drive and will to live continues even after it has been crushed.” It’s called the wind down effect. (127)


It had a slow beginning, but it picks up rather quickly about half way through. Suddenly, one questions the difference between reality and illusion, and then you have to see how it all ends.


A simplistically rendered tale, Wind Down is a perplexing race against time, scavenging in the dark depths of a foggy memory, to seek out Aaron’s killer and save his energy source.


A quick and easy read!