Review: EVERY WORD AN ARROW by Leona Silberberg 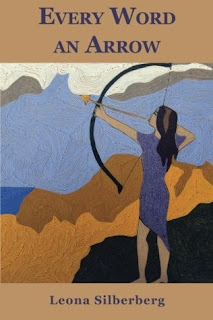 “The elk was trying to tell her something. He was trying to wake her up. He was trying to help her. She’d been unconscious for too long. She had been willfully avoiding seeing what was right before her. She had refused to open her eyes and see the situation for what it was: she’d married an abuser and now she would have to risk everything she’d worked so hard for in order to protect her children and give them a happy childhood. She put her hands to her face but the tears wouldn’t come. She was the figure in the dream and she was caught on the horns of a dilemma.” (8)


Full of artistic sorrow and brevity, Every Word an Arrow is a story of one woman’s strength and courage. After years of living in the dark, Josie must tunnel out of her cave and adjust to the bright light of a promising future.


As Josie goes through the frustrating litigation and bureaucratic procedures to get a divorce and a restraining order, the reader regresses to her previous years of marriage and motherhood, leaping between past and present. Story kind of sprinted over some areas yet lagged in others. I would've liked the author to have elaborated more on certain scenes that were more stimulating, like the confrontations between Josie and Richard. Instead the focus was more on the banalities of the couple's courtship in the past and the legalities of the court in the present.


The journey was long; the writing was rudimentary. I did wonder about the title: Every Word an Arrow. What does that mean and how does it convey this story?