Review: IF YOU COULD READ MY MIND by S.A. Hunter (9 Horror Stories) 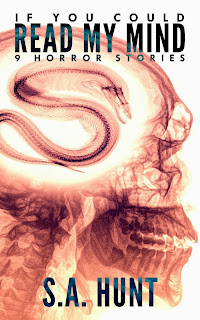 #1: “Talent Show” – Karen is living in a robot world. In fact, she actually has a robot making her high-tech life much easier. Suddenly, fearing he may be discontinued, the robot turns on Karen. It started off well, but the cliffhanger ending left me half-cocked.

#2: “Police Transcript” – This is literally a police transcript. Boring and stupid!

#3: “That Terrible Thing” – Sarah’s grandmother just died, and she’s stuck in her old, creepy house—a house that may be haunted by a ghost or a monster. At first, I thought Sarah might’ve dead because of “that terrible thing,” but I guess I might’ve been wrong. I couldn’t really tell due to the weird ending.


#4: “Muppets” – I liked the guy’s abrasive and crass manner in which he spoke—it was raw and realistic. He’s a guy on the loony meds and he hates it. I enjoyed the summary-account style of his story. He basically tells it the way it happened—how he was a police officer and how he got discharged by killing a whole bunch of guys. He was doing “God’s work” after all. The dash of humor made it extra enjoyable.

#5: “Trap House” – Confusing story that I couldn’t finish. End of that.

#6: “Chimney Sweep” – Waking up bound, tired, and naked. Yikes! Now, there’s a great way to start a nightmare. But what else could make it worse? How about being punished by Santa Claus for being on the naughty list? Now that’s a good one!

#9: “Dry Leaves” – Was this even a story? Or was it a chapter from another book? Couldn’t tell.

Out of the 9, only 2 stories were pretty good. But mostly they weren’t worth reading.

Posted by Sandra's Book Reviews at 7:23 AM